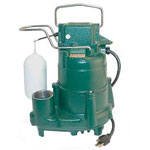 An ordinance that would have banned sump pump connections to Evanston's sewer system was pulled from the City Council agenda Monday.

The action came after some aldermen received complaints about the proposal from residents who'd learned of the plan from a story published Monday morning by Evanston Now.

Sump pumps are used to protect basements against flooding. Under the current city plumbing code they can legally be connected to the city's sewer system.

That's important for residents living on narrow lots — which often provide nowhere for the water to go if its poured onto the ground instead.

City staff claimed in proposing the ordinance change that it was needed to prevent sewer backups, even though the city has billed taxpayers in recent years for roughly $175 million in sewer construction projects that officials claim have almost totally eliminated the problem of basement flooding from the sewers during storms.

In a phone interview this morning, City Manager Wally Bobkiewicz said he pulled the ordinance from the council's agenda because he was concerned that it didn't provide any standards for waivers to the ban that could be granted by the city manager.

He added that he also wanted the city's engineering staff to come up with estimates of how much additional load the sump pumps add to the sewer system — to be able to assess how big a problem they pose.

And he said that because the issue hadn't been discussed by the council before, he didn't feel there was time to discuss it thoroughly Monday night with all the other items on the agenda. He plans to bring the proposed ordinance back before the City Council on Monday, Sept. 24.