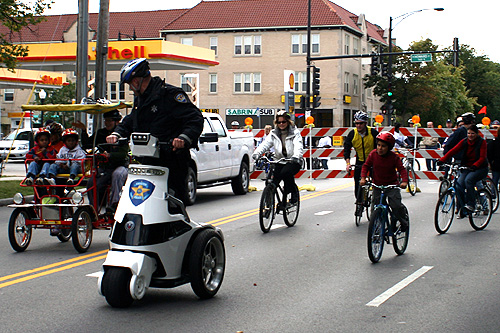 Evanston’s annual opportunity for bicyclists to have the run of Ridge Avenue continues until noon today. Mayor Elizabeth Tisdahl, in the white jacket in the photo above, was among the folks who began their ride at 9 a.m. at Howard Street, behind a police officer on a battery-powered scooter.

Ridge Avenue, which is normally barred to cyclists, was given the pedal-power Sunday morning event for the first time last year at the suggestion of local bicycle activists to mark the end of a long-awaited repaving project. 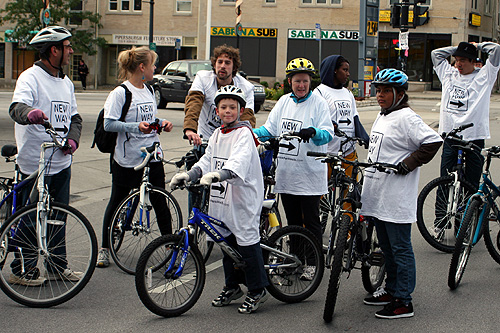 Evanston Fire Division Chief Tom Janetske says that at 10 a.m. there were an estimated 625 people riding the route, based on crowd counts from civilian volunteers posted at every intersection.

Politicians and their supporters were well represented among the participants, including a contingent of Patrick Keenan-Devlin for state representative supporters in “New Way” t-shirts, and Jeff Smith, another house candidate, riding with some of his supporters.

Various groups, including the McGaw YMCA, St. Nicholas Church and the Ridgeville Park District offered refreshments and encouragement for riders along the route.

The street is scheduled to reopen to motor traffic about 1 p.m. Until then drivers can cross only at intersections with traffic lights, where police are posted to give cyclists the right of way.