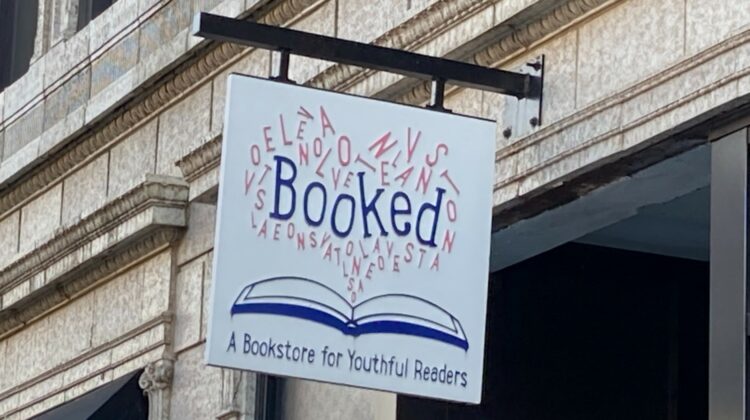 That, in a nutshell, sums up the impact of international supply chain delays on small businesses in Evanston.

Booked, the children’s bookstore on Main Street, was planning to market a ghost story by a popular author in time for Halloween. What better time for a story like that?

But store owner Rachel Round tells Evanston Now she recently heard from the publisher, who informed her the book will not be released until Nov. 2.

“What the heck,” Round says she replied. “Why release the book two days after Halloween?”

If that’s the macro, Booked is the micro. The delays, Round explains, “put me as a business owner in a bind.”

The delays are caused by a cascading series of events. Many books and other items are manufactured in Southeast Asia. COVID-related factory shutdowns have slowed production, which in turn leads to a supply shortage.

Then add in domestic labor shortages at West Coast ports and among trucking companies, and whatever does arrive in the United States can wait in Los Angeles to be off-loaded from a cargo ship, and then wait even more for a truck to carry the goods somewhere else.

So it goes with books, and with running shoes as well. The Journal article says that it now takes Nike 80 days to get a cargo container from Asian factories to North America, “about twice as long as it was before the pandemic.”

Delays like that are felt by Murphy’s Fit, a Dempster Street store that specializes in running shoes.

“We’re on the list with furniture and appliances,” says co-owner Mike Jolls. “I don’t feel alone.”

Jolls adds that the situation is better than it was at the beginning of summer, and customers are patient. “They say put me on the list and call me when it gets in.” he explains.

At the bookstore, owner Round says she’s doing what she can to adjust to shipping delays.

“I’ve already placed my holiday book orders,” she says, “much earlier than usual.” Typically, she says books for Christmas and Hanukkah would be ordered a couple of weeks from now. This year, she says, they were ordered in early September.

“Thank God for this community that kept us afloat during those really challenging months,” Round says.