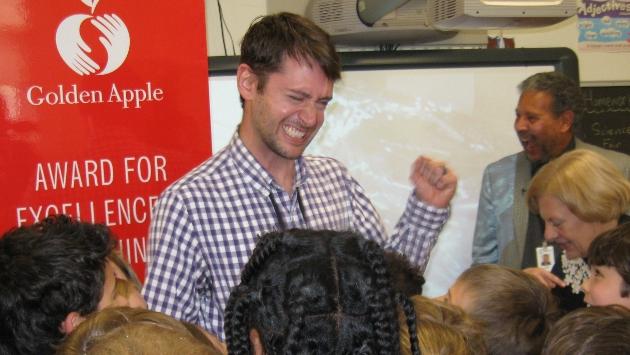 There were hugs and kisses and yelling and screaming aplenty Wednesday morning in the second grade classroom of James Schamber at Evanston’s Orrington Elementary School as a horde of media, family, and school officials invaded his domain to advise him that he was a 2015 recipient of the coveted Golden Apple Award.

One of only 10 recipients in the Chicago metropolitan area from a pool of 600 nominees, the 35-year-old DePaul graduate gloried in the high point of his nine-year teaching career at Orrington.

On hand for the happy event were his wife, Brooke, his mother, Patti, and his son, Reid, 3, and daughter Lila, 15 months, as well as District 65 Superintendent Paul Goren and school board member Sunith Kartha, a parent of one of Schamber’s former students. 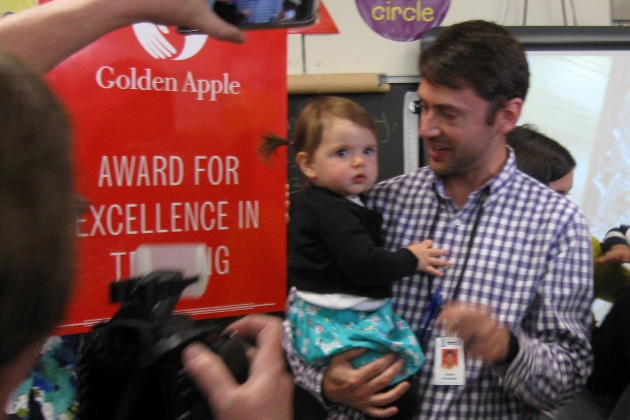 Schamber's daughter, Lila, doesn't know what to think of all the excitement surrounding her dad.

Each Golden Apple Award recipient receives a tuition-free, spring quarter sabbatical to study at Northwestern University, and a $5,000 cash award.

“These teachers are shining examples of the dedication, perseverance, innovation, and encouragement that empower students to grow and recognize their abilities to excel in life,” said Dominic Belmonte, president and CEO of Golden Apple. 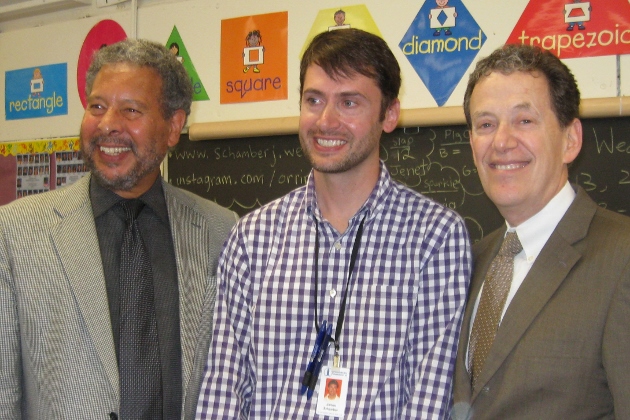 Orrington Principal Renaud J. Beaudoin and Superintendent Goren were among the congratulators.

Although he was genuinely surprised at Wednesday’s emotional outpouring of support, Schamber was aware that he was one of 30 finalists for the award, as earlier in the year a team of former Golden Apple recipients had spent a day in his classroom, observing his interaction with the students.

From their report, a committee had narrowed down the list to the 10 recipients 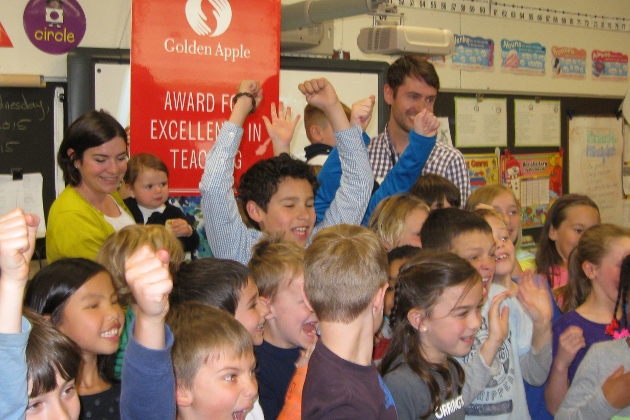 Schamber's wife, Brooke, and his second graders all joined in the celebration.

The report notes that humor plays a big role in Schamber’s classroom and that he leverages technology, dancing, and singing to create a fun, comfortable, and engaging classroom environment.

Schamber says he believes humor is a motivational tool and helps define the nature of expectations within academic periods. Most importantly, he says, he looks for a student’s potential rather than focusing on perceived challenges.