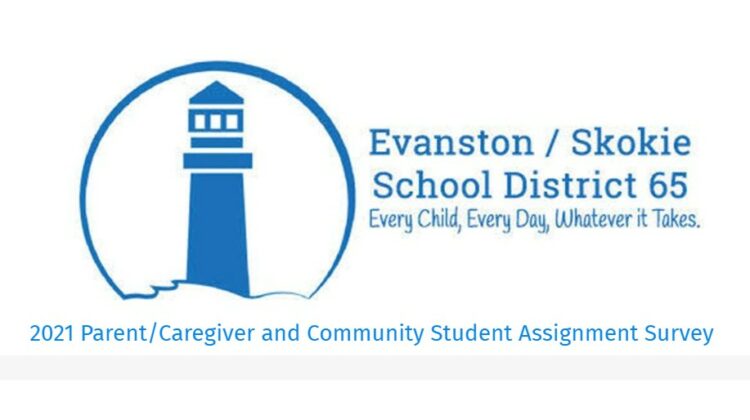 Those are among many issues parents, guardians, and community members in general are being asked to evaluate, as Evanston/Skokie District 65 plans a future which could look quite different than the present.

A survey, available on the district’s website in English and Spanish, will help guide decision makers as they redraw school attendance lines, determine whether to build a school in the 5th Ward, and possibly change the current structure of grade K-5 elementary schools, grade 6-8 middle schools, and K-8 magnet schools, along with other possible modifications to district programs.

The document says the district’s school attendance lines have not changed since 1994/95, and says one district goal is to “address historical inequities.”

The 5th Ward has been without a neighborhood school since Foster School closed in 1967. The survey asks respondents if they would favor a new school in the historically Black community if it would “decrease the enrollment of students of color at other district schools (primarily the Northside of Evanston)” because 5th Ward students would no longer be bused to other communities.

Other questions deal with the importance of things such as what is the best distance from home to school, the availability of special programs such as Two Way Immersion (English/Spanish), and how Evanstonians prioritize diversity in a child’s school, racially, ethnically, and economically.

Speaking of priorities, the survey also asks if siblings of current magnet or selective school programs should still be prioritized for enrollment, or if that priority should be dropped in favor of some type of lottery.

The community is also asked if they prefer keeping the current grade structure in District 65 schools, changing to K-2, 3-5, and 6-8, or perhaps adding more magnet schools or even eliminating them.

One of the most intriguing questions asks “How likely is it that your child currently attends school with other kids from your block?”

If the school board does end up tilting towards more neighborhood-centered schools, the chances of walking to school with the kid next door a few years from now might increase.