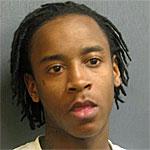 Police say one of two men taken into custody Friday after a yard-to-yard search near Evanston's lakefront now has been charged with weapons violations.

Antoine Sanders, 21, of 7015 N. Paulina Ave. in Chicago, was charged with unlawful use of a weapon by a  felon and possession of ammunition without a firearm owners ID card.

Police say Sanders was one of three men who bailed out of a car on Greenwood Street near Judson Avenue shortly before 11 a.m. Friday morning.

The car had been identified minutes earlier as having been involved in an incident in which shots were fired near Gale Elementary School in Rogers Park.

Police say they recovered a .40 caliber semi-automatic handgun from the vehicle that Sanders had been riding in, and another .40 caliber handgun was located in the 1300 block of Forest Avenue during the search.

Police released the second subject in custody without charges on Sunday. A third subject who fled the vehicle has not been apprehended or identified.

Police have submitted the recovered firearms for latent fingerprints to the Illinois State Police Crime Lab in hopes of identifying the third offender and linking Sanders along with the second subject, who is currently on parole, to the recovered weapons.

Sanders is scheduled to appear in Skokie district court at 9 a.m. June 18.