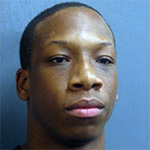 A 21-year-old Evanston man was charged today with firing shots across the street from Evanston Township High School about 4 p.m. Tuesday.

Police say Terrance J. Gunn, 21, of 112 Custer St., got into a dispute with another person in the front yard of a home in the 1600 block of Dodge Avenue.

Gunn, who fled on foot, was captured in the 1700 block of Darrow Avenue by police already in the area. Parrott says they found him in possession of a .22 semi-automatic pistol.

Parrott says shell casings recovered from the front yard of the home where the shooting took place indicate a second weapon was used in the incident.

Police took a second person into custody, but witnesses were unable to identify that person as the other shooter, and police have been unable to locate the second weapon.

No charges have been filed at this time against the second person.

Gunn, a convicted felon, has been charged with unlawful use of weapons by a felon, possesion of a firearm with an altered serial number and possession of a firearm and ammunition without a valid firearm owners identification card.

Shots fired at Church and Dodge