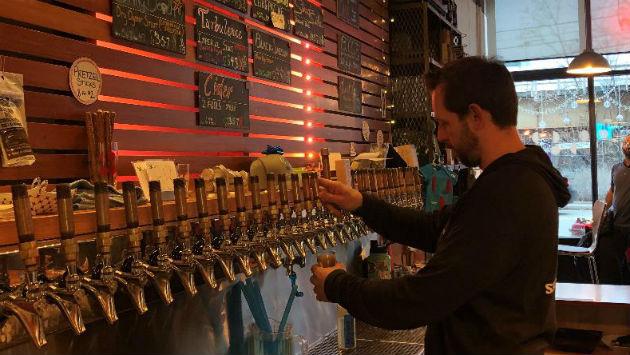 Making beer contributes to land pollution, greenhouse gas emissions and water waste. But Evanston’s Sketchbook Brewing Co. is trying to change all that.

“Sustainability has been our motto since day one,” says Cesar Marron, head brewer and managing partner at Sketchbook, a seven-barrel brewhouse at 821 Chicago Ave.

The Brewers Association estimates that it takes five to seven barrels of water to create one barrel of beer, and even the most sustainable breweries produce at a rate of 3.31:1. Marron estimates that Sketchbook operates around this level.

Cleaning contributes to a large portion of waste. Even Sketchbook’s cleaning process uses the minimum amount of water possible. They reuse the same water to wash multiple tanks. Marron estimates that Sketchbook donates 90-95 percent of its nutrient-rich spent grain to a local farmer, who uses it to replenish soil.

Located just steps from the Main Purple Line “L” stop, Sketchbook is right in the middle of Evanston’s action.

The cozy taproom is a colorful and vibrant space. In a nod to its name, upon each table sits a cup of colored pencils, which guests can use to draw on coasters. Everything from the bars and tabletops made from old bowling alley lanes to the 19th-century flooring is repurposed or recycled.

“The main reason we wanted to open a manufacturing business in a densely populated area was to tackle another aspect of sustainability—which is people driving,” Marron said. “In this location, we figured people are going to walk to us.”

Indeed, Evanstonians walk to Sketchbook in droves. One such customer is Grant Alexander, a chemistry doctoral candidate at Northwestern University. Alexander became a Sketchbook member upon moving nearby. He says he was attracted to the atmosphere and the people.

“To hear their beer is sustainably brewed, that’s great,” Alexander said. “I can imagine larger breweries start cutting corners and it violates sustainability.”

Sketchbook’s selection includes 16 rotating brews, such as the Honeybird Pale Ale, featuring hints of honey and Thai basil, or the Briny Beach, which is infused with Delaware Bay oysters.

Sketchbook members pay a fee and get a reusable glass 64-ounce growler that they can fill once or twice a month for a discount that brings the price of a growler refill to around $13. Members also receive a discount on any other beers purchased in the taproom.

Marron estimates that 50 percent of customers in the taproom at any given time are members.

“Some of those members are hardcore even though buying cans is cheaper,” Marron says.

A recent survey found that consumers say they are willing to pay an average of $1.30 more per six pack for beer produced at breweries that take measures to conserve water or limit greenhouse gas emissions.

Sketchbook adds to a growing repertoire of such breweries based in the Chicago area. Whiner Beer, based in The Plant at 1400 W. 46th St. in Chicago, donates brewing byproducts to other companies based there, which in turn is used for things like composting soil for the five acres of farmland on site and as an ingredient in food production.

Motor Row Brewing’s building at 2337 S. Michigan Ave. is LEED-certified silver, the second-ranked tier for meeting sustainability and energy-saving standards. And Uncommon Ground’s Greenstar Brewing, 3800 N. Clark St., is the first organic certified brewery in Chicago, located in what the Green Restaurant Association called the second-greenest restaurant in the country that features solar panels, LED lights and tables made from fallen trees.

“We’ve been very blessed with the success in terms of having our local people continue to come by,” Marron said.