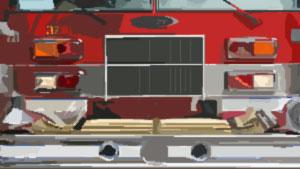 An Evanston fire truck collided with a sport utility vehicle at Ridge Avenue and Central Street this morning.

Evanston Fire Chief Greg Klaiber says truck 23 was responding to a fire call when the accident occurred about 9:45 a.m.

Klaiber says the woman driving the SUV may have suffered a seizure or blacked out as she tried to pass the truck.

After striking the fire truck, Klaiber says, the SUV also struck a pole. The woman, who was unconscious immediately after the accident, was taken to Evanston Hospital.

One firefighter suffered a cut to his arm getting the woman out of her car.

Klaiber says damage to the fire truck was minor and that Evanston police are investigating the accident.