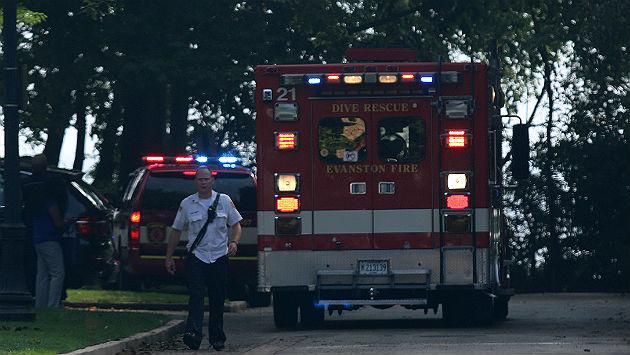 A Skokie man about 60 years old was pulled from Lake Michigan by members of the Evanston Fire Department dive team this morning and rushed to Evanston Hospital where at last report he was in very critical condition.

Fire Division Chief Paul Polep says a group of four men went swimming this morning from a residence in the 2700 block of Sheridan Road, near Ingleside Place.

While in the water one of the men appeared to become ill and was unable to get out.

Polep says the Fire Department was called by a resident of the block about 8:46 a.m.

The caller told Evanston Now she saw the man trying to hold on to a piece of wood floating in the water, but it kept turning around, causing him to lose his grip.

When firefighters arrived on the scene, three of the men were getting out of the water, but the fourth man wasn’t visible.

Fire rescue swimmers went in the water, Polep says, and managed to find the victim under water and brought him back to shore, where firefighters started CPR and transported him to the hospital.

Police Cmdr. Ryan Glew says it’s believed the men were doing construction work at a home on the block when they decide to take the swim.