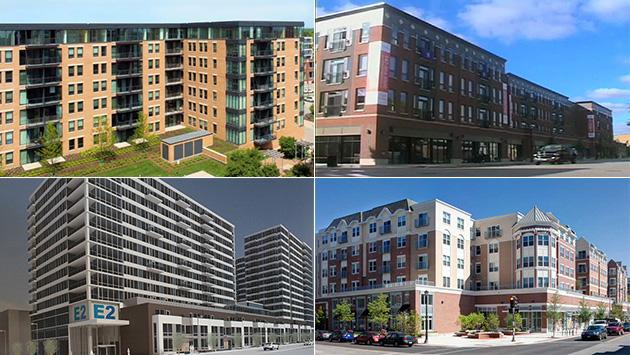 In Evanston's residential development market, 2013 cleared out a backlog of projects that had stalled during the real estate crisis that began in 2007.

The 214-unit AMLI Residential development on Chicago Avenue was first announced in early 2008 and won city approval for a scaled-down version late that year. But with the housing market slowdown, demolition of the old retail buildings on the site didn't start until late 2011, with groundbreaking early last year.

The 175-unit 1717 Ridge building, for years was just a hole in the ground after the developer of the adjacent Sienna condominium complex went bankrupt after completing only two of four planned buildings. But with a new developer, and a new design for a single rental building the project was revived, with construction completed last Spring.   And the developers sold it in September for about $70 million — described as the highest price per unit ever paid for a suburban Chicago development.

The 80-unit Central Station development, originally approved in 2007 as a condo project called The Eastwood on the former site of the Evanston Theater, broke ground in mid-2012 as a rental development and was completed this year.

E2, a 356-unit two-tower rental development on Emerson Street downtown between Maple and Oak avenues, broke ground in October. It's scheduled for completion in 2015. The west tower tower had been approved as a condo project in 2006, the east tower as a rental project in 2007. And, after a long hiatus they were revived in late 2012 with a new lead developer.

But while all those project eventually went forward, aldermen last month shot down plans for what would have been the city's tallest building — refusing to give the developer of the 708 Church St. tower, originally approved in 2009, an extention of time to begin construction.