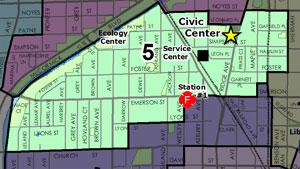 A handful of 5th Ward residents fondly recalled their days at the old Foster School Thursday night, while voicing fears about census data that show the ward is no longer majority black.

The unusally lightly attended ward meeting at the Fleetwood-Jourdain Center featured presentations from Gilo Kwesi Logan of Citizens for a Better Evanston, a group backing the referendum to build a new school in the ward, and from Evanston's community and economic development director, Steve Griffin, on the results of the 2010 census.

"I'm concerned that so many African-Americans are moving out of Evanston — more than any other race," one resident said, after Griffin noted that the number of blacks in the ward has declined nearly 38 percent since 2000, while the ward's total population has dropped just over 2 percent.

The black population city-wide has also declined, but not as sharply.

Griffin said the foreclosure crisis hit pretty hard citywide, but had an especially severe impact in the 5th Ward.

And Evanston "is a tough town to find affordable housing in," Griffin added.

Jerome Summers, a District 65 school board member and Foster School graduate, argued that a new 5th Ward school would revive the community. "Schools are the number one community building institution in America," Summers claimed.

And he decried the practice of busing students from the ward to achieve racial balance in other schools.

But some residents said they didn't like the school board's plan to build the new school on Foster Field, because it would reduce the amount of space available for youth sports activities.

And while the school board projects that 88 percent of the students at the new school will be low income, resident Carlis Sutton said he fears gentrification in the ward.

"The only think that keeps us from being Kenilworth is that a few black people won't leave," Sutton claimed.

Essentially no market-rate housing has been built in the ward for the past half-century, except for a few dozen town homes at Church Street Village development. And property values have declined sharply with the recession. However Sutton sees a transformation afoot.

"Gentrification tells me this land is now too valuable for black people," he said.

But at the same time, he criticized the city's plan to build new subsidized housing across from Fleetwood on the former Bishop Freeman warehouse site.

Sutton, who owns rental apartment buildings, said "with all this vacant property in the ward, I have real serious problems with why we're building more housing. That land could have been used as the site for a school."

Meanwhile, Logan, a teacher who has taught in Evanston and Chicago schools, painted a picture of rampant classroom overcrowding if the referendum fails to pass.

He said the average class size in Evanston now is 21 or 22 students and would rise to 30 to 32 if the referendum is rejected.