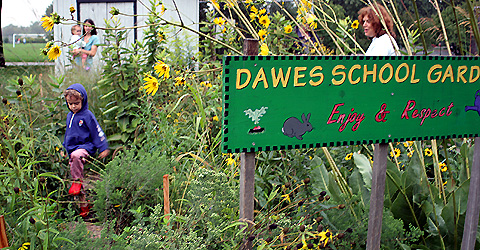 About 70 people turned out at the Dawes School auditorium Tuesday night to consider creating an urban farm in Evanston.

After a tour of the school’s garden plot, panelists told the group that a small-scale farm in the city can provide high-quality organic food as well as job training programs and other community benefits.

“You do need quite a bit of money” to start an urban farm, said Evanston resident Patsy Benveniste, who’s director of education at the Chicago Botanic Garden.

“But I don’t think money is a problem here,” she added, based on her experience fundraising for similar programs elsewhere in the metro area.

“An urban farm has all the factors of a good story when seeking foundation support,” she said, “likeable characters, a set of goals that appeals to our hopes for the future and a story line that makes room for us and our families.”

Ms. Benveniste suggested structuring the project as a “social enterprise,” a not-for-profit that generates revenue through sales of its products, but also seeks contributions to support educational and job training programs and capital needs.

She said a horticulture training programs for teens at the Botanic Garden’s Windy City Harvest programs in Waukegan and Chicago’s North Lawndale community have turned into a fundraising machine for the organization.

“It teaches at-risk young people about teamwork, discipline and entrepreneurship — all things they may not have known about,” she said, “and it attracts the attention of fundraisers, donors and legislators.” 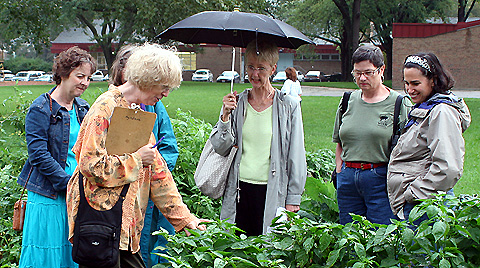 Retired Dawes teacher Lynn Hyndman, who runs the Dawes Edible Garden Project, shows off the crops to visitors during the open house.

Michael Thompson, manager of the Chicago Honey Co-op, said his three-year-old organization is set up as a for-profit business, but received a grant the first year from the state department of corrections to provide job training for exconvicts.

He said the co-op has been able to lease nearly four acres of land for a nominal fee on the old Sears property in North Lawndale. It has three full-time employees and nearly two-dozen trainees. It sells its honey at four local farmers markets.

Harry Rhodes, executive director of Growing Home, Inc., said that a study a few years ago indicated that of up to $80 million worth of organic produce sold in the Chicago area, only three percent is grown locally.

He said that after an unsuccessful attempt to set up an urban farming program for homeless people at Navy Pier in Chicago, his group got 10 acres of land in ex-urban Marseilles, Ill.

“It’s a social enterprise,” he said, “a not-for-profit that produces income through its work and uses that income to try to cover the cost of running the organic agriculture business and support our social mission.”

“Organic is a good business opportunity,” he said, “The organic food sector has grown over 20 percent a year for a number of years and it looks like it will continue to grow.”

The Evanston Food Policy Council plans to hold another organizing meeting at 7 p.m. on Thursday, Oct. 12, at the Unitarian Church, 1330 Ridge Ave.

In the meantime they’re attempting to identify publicly owned land in town that might be used as an urban farm site. Suggestions have included city parkland, the CTA Yellow Line right-of-way, and Metropolitan Water Reclamation District land along the North Shore Channel.