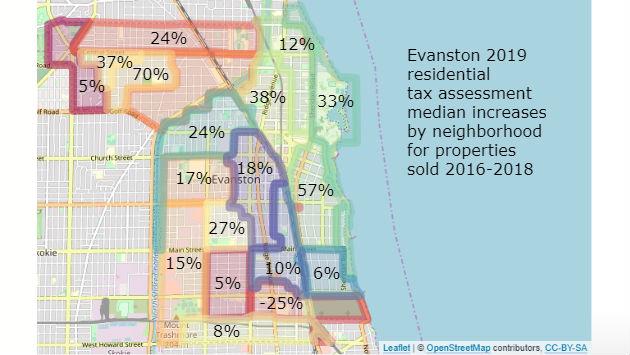 The Cook County Assessor’s Office says residential property assessment changes in Evanston issued earlier this month ranged from a decline averaging 25 percent in one south Evanston neighborhood to an increase averaging 70 percent in neighborhood on the northwest side of the city.

Averaging the changes for all 18 neighborhoods designated by the assessor’s office and you get a median assessment increase of 21 percent.

The assessor’s office says that compares to a roughly 10 percent increase in property values in Evanston since the last reassessment in 2016, based on data from the Institute for Housing Studies at DePaul University.

In a report, the assessor’s office says the aggregate assessed value of residential property in Evanston has increased by just under 25 percent during those three years — from $5.17 billion to $6.46 billion.

The office also says the increase in assessed values this year was lower than what it says was a 30 percent increase in 2016. That was the first reassessment to capture the gradual recovery of housing values after the real estate market collapse late last decade.

Fritz Kaegi, who was elected county assessor last fall, is scheduled to speak at the Central Street Neighbors Association meeting Thursday in the multipurpose room at Three Crowns Park, 2323 McDaniel Ave. Doors open at 6:30 p.m. A brief CSNA annual meeting starts at 7 p.m., with Kaegi to speak after that.

Editor’s note 3/29/19: We learned today from the assessor’s office that the numbers they provided that are presented on the map above represent the median change in assessed value for only residential properties in each neighborhood that sold during the past three years. The percentage change for all residential properties in a neighborhood generally will be different.