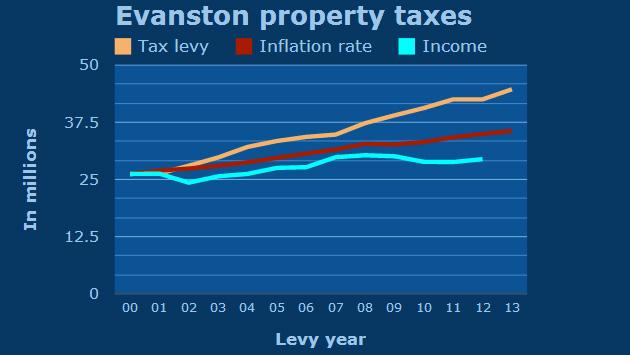 Evanston aldermen this week made no changes when they approved introduction of property tax levies that will hike residents bills by 5 percent next year.

As reported earlier this week, Evanston tax bills have been rising at an average of twice the rate of inflation for more than a decade.

But the tax burden is growing even faster than average incomes. Data from the U.S. Census Bureau shows that the median household income in Illinois rose just 12 percent from 2000 through 2012, while Evanston's property tax levy rose by 62 percent over the same time span.

While much of the proposed tax increase for next year is driven by a massive increase in library spending, the only comment about that Monday night came from Mayor Elizabeth Tisdahl, who said the library has been underfunded for years and it's "wise for us to support the increase."

She didn't suggest any compensating cuts to other programs to adjust for what she saw as the library underfunding.

Top: A chart showing the growth in Evanston property tax levy since 2000, with the corresponding percentage changes in the consumer price index and the median household income of Illinois residents.