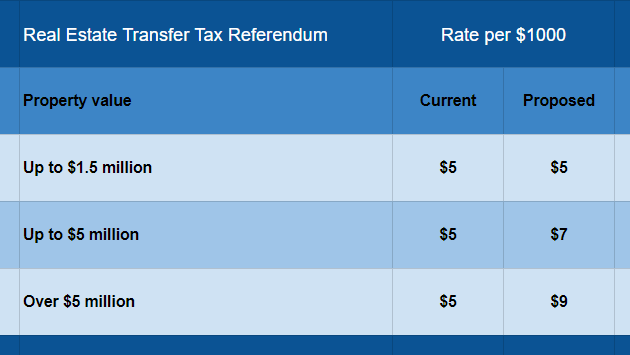 Despite pleas from several housing activists, the November referendum to raise Evanston’s Real Estate Transfer Tax won’t target the additional funds the tax increase would raise to be spent for affordable housing.

Mayor Steve Hagerty told the activists from Reclaim Evanston at Monday’s City Council meeting that it was too late to change the proposed wording of the ballot issue — because the language had already been published in a public notice and there was no time left to republish the notice before the deadline for submitting the ballot language to the county for placement on the ballot.

The language now calls for using the money for the city’s general fund.

But the city is free to transfer money from the general fund to other programs, and Alderman Ann Rainey, 8th Ward, suggested she’d favor allocating some of the new transfer tax revenue to affordable housing programs at some point in the future.

Bonnie Wilson said increasing the tax on high-value property sales would discourage commercial and multi-family residential development in the city.

Don Schollenberger said the tax hike wouldn’t be the right solution to the city’s budget problems.

The referendum proposal voters will see in November, which would establish the first graduated transfer tax in the state, reads as follows:

The current rate of the real estate transfer tax is five dollars ($5.00) for every one thousand dollars ($1,000.00) of value, or fraction 14 of 513 – 3 – thereof, and the revenue is used for the City’s general fund. The revenue from the increase is to be used for the funding of the City’s General Operating Fund, with the increase being used for improvements related to public safety, public health, parks and recreation services, street improvements, and other necessary City services.