The ordinance asserts that teardowns reduce the stock of affordable housing in Evanston. It imposes a $10,000 tax on anyone who tears down a single family home and directs that the money raised be used to develop affordable housing.

Alderman Edmund Moran, 6th Ward, has been the primary advocate of the teardown tax. His house at 2522 Isabella St. is next door to a property that was torn down and sold to a developer last fall for $565,000.

County Recorder of Deeds records indicate the developer, Forest Glen Construction Co., is now carrying a mortgage of over $1.9 million on the property as it starts building a new home on the site.

Ald. Moran and his immediate neighbors may feel under siege by the teardowns. Directly across the street from his house, on the Wilmette side of Isabella Street, a new home is nearing completion on a teardown site, and just down the block from that property another hole in the ground is about to sprout another new home. 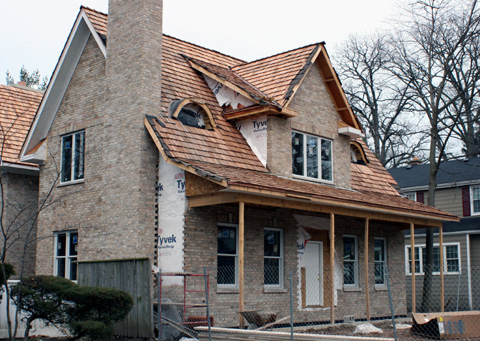 The new house on Isabella in Wilmette, across the street from the Moran home. (Bill Smith photo)

City planning department figures show that 32 homes have been torn down and replaced over past eight years — about one-third of one percent of Evanstonâ€™s stock of nearly 9,600 single-family homes.

As of last month Evanston had collected only one fee under the teardown tax ordinance.

The house that used to be at 2520 Isabella St. (Cook County Assessor photo)

Xchange Properties, a real estate firm specializing in teardowns, currently has just one listing in Evanston, compared to eight in Glenview and six in Highland Park.

The revised ordinance would eliminate an exemption from the tax for any replacement home valued at $500,000 or less. The city’s legal staff feared that because that amount is substantially above federal and state affordable housing standards, it might not survive a challenge based on constitutional equal protection guarantees.

But the legal staff believes they’ve found a way to save the rest of the ordinance by reworking another provision designed to let long-term residents avoid the tax.

Under that provision someone who’s lived in a property at least three years could tear down and rebuild and instead of paying the tax, have the city place a $10,000 tax lien on the property. The city would release the lien if the owner lived in the new home for at least another three years.