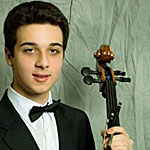 Ben Solomonow, a cellist who’s a freshman at Evanston Township High School, will appear on NPR’s "From the Top" radio program this month.

The show will air nationally the week of Jan. 17 and locally on WFMT 98.7 FM on Sunday, Jan. 23 at 7 p.m. The episode was taped before a live audience at the Zoellner Arts Center at Lehigh University in Bethlehem, Pa.

Ben started playing the cello at the age of 5 and is currently a student of Hans Jensen. He studies with the Midwest Young Artists, where he is currently the principal cellist of the MYA’s most advanced performing orchestra, the Symphony Orchestra.

He is also a member of a chamber music group. Ben has played in master classes for Lynn Harrell, William Preucil, the Avalon Quartet and Alice Schoenfeld. In January 2010, Ben won the top prize of the senior division in the Walgreens National Concerto Competition.

On the show Ben performs Variations on a Paganini Theme by Gregory Piatigorsky, accompanied by Christopher O’Riley, piano.

Broadcast on nearly 250 stations nationwide to an audience of more than 700,000 listeners each week, "From the Top" is one of the most popular classical music programs on radio.