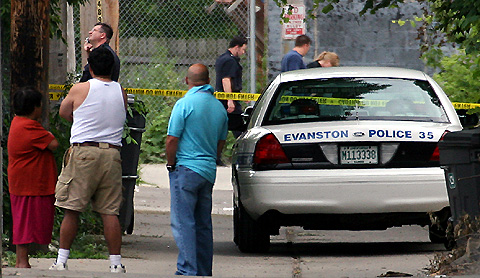 A 17-year-old youth was shot and fatally wounded in the alley behind 1722 Dodge Ave. this afternoon.

As neighbors watch, police search the alley behind 1722 Dodge Ave. for evidence in the fatal shooting.

Evanston police say they were called to the scene at 1:41 p.m. and found Darryl Shannon Pickett shot and unresponsive in the alley.

Fire paramedics treated the youth at the scene and transported him to Evanston Hospital where police say he was pronounced dead at 2:11 p.m. 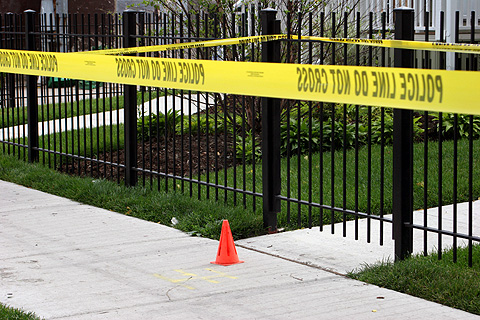 A cone marks a location on the sidewalk along Dodge Avenue where police recovered evidence in the case.

The victim, who lived in the 1900 block of Hartrey Avenue, reportedly was a player on the Evanston Township High School football team. The school is less than a block from the shooting scene.

Residents of the neighborhood say the victim had gotten into an argument with a group of teens on the sidewalk in the 1700 block of Dodge. The dispute moved into the alley, where one man who’d been involved in the dispute pulled out a gun and shot the victim.

Evanston police and the North Regional Major Crimes Task Force are investigating. Police say they have no suspect in custody.