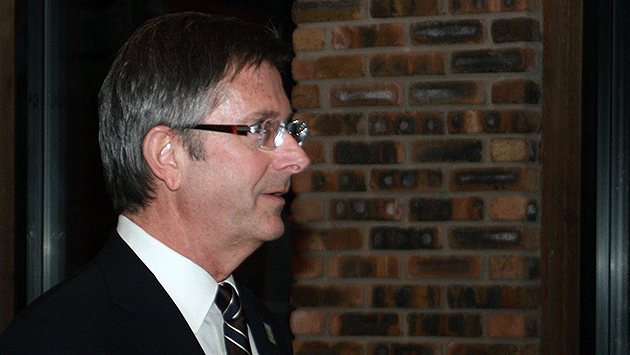 Mark Tendam launched his campaign to retain his position as Evanston's 6th Ward alderman surrounded by fellow aldermen and other elected officials.

And, while the sports groups involved pulled out of talks with the city after receiving criticism of the project's finances from aldermen on the Administration and Public Works Committee, Tendam insisted in an interview with Evanston Now that the project is not dead.

A crowd of about 50 people (above) gathered at the Central Street Cafe to hear Alderman Mark Tendam (top) launch his re-election campaign.

"There's actually an alternative plan in the works," Tendam said.

"No one's conceded defeat on this," he added, "I think the plan is a good one and we can bring it back."

He said that in addition to himself, the project has the support of at least three other aldermen — Peter Braithwaite, 2nd Ward; Don Wilson, 4th Ward, and Jane Grover, 7th Ward.

David Campbell, the past president of the Evanston Baseball and Softball Association, says his group and the other non-profits that collaborated on the indoor recreation proposal are not in any talks now with the city about the project.

Campbell said the city raised its expectations for revenue from the project to the point at which it would have been cheaper for the groups to rent vacant industrial space in Skokie instead.

In addition, Campbell said, the higher cost structure would have made it impossible for kids of limited financial means to participate.

He said the city may now be talking with a for-profit company about the space. But not everybody can afford to spend the rates they charge, which Campbell said can run $50 an hour for practice time.

Overall, Tendam said, the key issue for the campaign is fiscal responsibility.

He said that he and other members of the current city council "have been very cautious about spending money."

But he said the city's budget now "has been cut down to the bone, and any further reductions would do harm to the character of the community."

"Since we don't want to raise taxes," Tendam added, the city needs to focus on economic development to bring in new revenue.

Mayor Elizabeth Tisdahl was among the officials who turned out for the Tendam event, along with Aldermen Coleen Burrus, Jane Grover and Don Wilson, State Sen. Daniel Biss and State Rep. Robyn Gabel.

In addition to putting together a good economic development team, Tendam said, the City Council has "been a little easier than in the past" for developers to work with.

Evanston had developed a reputation as a community that "made people jump through hoops to get plans and permits," Tendam said. "But now we're really seeing the developers' side and know we need to work with them and not against them."

But at the same time he said he'd worked with neighbors to dramatically reduce the impact of a planned new Chase Bank branch at Crawford Avenue and Gross Point Road.

With the revised plan, Tendam said, the project "will take a blighted corner and turn it into a very pleasant entrance to the neighborhood."