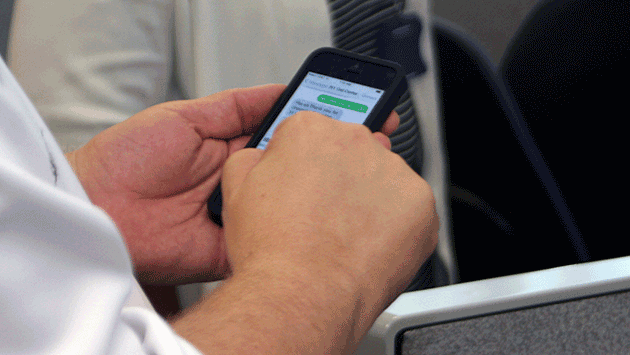 Sometime next year Evanston residents are expected to be able to start sending text messages to the city's 911 emergency phone system.

That's one of the developments in the pipeline reported as the city unveiled an upgraded text-messaging service for the city's 311 information center Friday.

The communications coordinator for the city's 911 service, Perry Polinski, says the upgrade is expected to be paid for from the Emergency Telephone System fund — which receives its funding from fees added to phone bills.

"We're in the process of identifying the best solution for implementation and determining costs," Polinski told Evanston Now. "Early indications are that the cost will be minimal, dependent upon which solution is deployed," he added.

But while texting will add another option for people with disabilities — and for people in situations where they may fear making a voice call would put them at risk — Polinski says the people who take public safety emergency calls tend to prefer voice calls.

That, he says, is because of the limitations inherent in text messaging, including the inability to hear background noise that may provide clues about the severity of a situation and issues with determining where the message is coming from.

In addition, Polinski says, text message are sometime delayed and multple messages can arrive out of sequence.

And, unlike with a voice call where you know when somebody has picked up the line, Polinski says, senders of a text message can't be sure whether their message has actually gotten through.