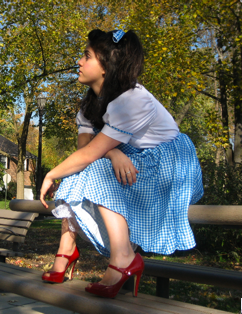 America’s largest student-produced musical, The Dolphin Show at Northwestern University, celebrates it’s 67th year this January with a dynamic re-imagining of the timeless classic The Wizard of Oz.

"We are thrilled to bring Oz to life on stage for a whole new generation to experience and appreciate. The Wizard of Oz was a literary and cinematic masterpiece, and The Dolphin Show is thrilled to have the opportunity to stage it. With The Dolphin Show going into its 67th year, The Wizard of Oz is certain to continue its tradition of celebrating the arts and entertaining both the Northwestern and Chicagoland communities," said Executive Producer/President Zachary Baer.

"The classic 1939 MGM film The Wizard of Oz has been a part of every American childhood. Seventy year later, Oz’s message of love and the importance of family and friends is incredibly relevant. It has been an honor to translate the story we all know and love to the stage, telling it from a modern perspective," says Director Katie Spelman.

Written in 1900 by L. Frank Baum, The Wizard of Oz tells the story of Dorothy Gale from Kansas, a girl who dreams of what lies over the rainbow. When a cyclone hits her farm and carries her to the land of Oz, Dorothy must journey to the great and powerful Wizard in order to find a way home. Along the way, she meets the Scarecrow, the Tinman, and the Cowardly Lion, all of whom join her as she ventures down the yellow brick road to the Emerald City. Featuring the classic songs "Over the Rainbow" and "We’re Off to See the Wizard", The Wizard of Oz is a treat for the entire family.

Performances run January 23rd – 31st in Cahn Auditorium (Evanston, IL). For more information on ticketing, please visit www.nudolphinshow.org, call the box office at (847) 467-4000, or visit the box office at Pick-Staiger on Northwestern’s Evanston campus. Tickets may also be purchased at the door. Tickets are $25 for the general public, $20 for seniors, and $10 for children/students.

The Dolphin Show began in the 1940’s as a production in a the swimming pool to benefit the Dolphin Club swim team. Now in its 67th year, The Dolphin Show has moved its productions onto dry land and has become the largest entirely student-produced musical in the country and a Northwestern and Greater Chicago tradition, boasting professional quality production values and a team of over a hundred undergraduate students. The Dolphin Show is also dedicated to engaging the greater Chicagoland community through extensive philanthropy, outreach programming and community-focused events.

To find out more about The Dolphin Show at Northwestern University, please visit www.nudolphinshow.org.