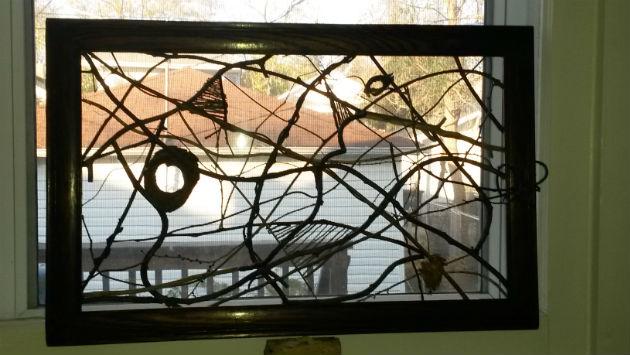 Michelle’s journey to homelessness began with heavy rainfall, when dozens of basements flooded in Evanston in April 2013.

“The sink and dishwasher exploded,” she remembers. The water ruined her clothes and shoes, and soon turned her basement rental moldy. Her landlord, she says, did nothing. City inspectors deemed it uninhabitable.

She took her daughter to live with her father in another suburb. “It was a mutual decision because I wanted stability for my little girl. She’s doing so well there.”

Michelle, who asked that her last name be withheld, had previously working as a music promoter and club manager. She was a separated single parent selling custom-made jewelry and living paycheck to paycheck.

Michelle moved in with friends, paying them a little rent. That arrangement ended abruptly when she found the house locked to keep her out. Her friends bagged her belongings, gave her $20, and took her to St. Paul’s Lutheran Church. Luckily the emergency overnight shelter was open that frigid January night.

Carrying her clothes, art supplies, books, a pillowcase full of scarves, and her backpack, Michelle signed into the shelter for the first time. “I was crying and laughing, I was almost psychotic.” She remembers leaning on two Interfaith Action staff members, Sue Murphy and Birch Burghardt. She kept telling everyone she wasn’t on drugs because she knew how it looked.

She'd been volunteering at the Vineyard Christian Church where she'd met some of the homeless men she now encountered again at the shelter. They tried to reassure her. She met two women, and they bonded over Bible reading. She gave away all her scarves to the other guests.

That was a Tuesday night. On Wednesday, she went to volunteer at the Vineyard, like always. “That kept me sane.” She told people she was now homeless. Some friends gave her money, stressing it was a gift, not a loan. “But it wasn’t just financial, it was emotional support.”

The next night at the shelter her backpack went missing, and she found a woman rifling through it in the restroom. “I kicked open the door of the stall to get it back,” she remembers.

After that, she spent nights literally on the street. The weather was cold, but not cold enough for the emergency shelter to open. A man named Steve—she remembers him as funny, dressed to a T, and a complete alcoholic — showed her places to keep warm, like Starbucks and Burger King. The best place to bed down, he told her, was in the lower levels of parking garages.

She entered the 90-day program at Hilda’s Place, but felt too exhausted to do anything. There was bickering in the women’s dormitory. Drawing on her camping experience, Michelle made a tent in the dormitory to create some privacy. She credits case manager Jazmine Bingham for pushing her: she took art classes and visited the Illinois employment office at the Evanston Public Library.

Now she works at a pizza restaurant in downtown Evanston, but wants more work because the hours vary. She rents a room in a house from an older couple in south Evanston. Recently they asked if she wanted to move to their basement rental for less money. “I had to know it wouldn’t flood!” she says. She keeps her room tidy, decorated with art, her supplies on a bookshelf. She feels eager to get back to drawing and making jewelry.

Recently at the Vineyard Michelle volunteer group made up 40 bags for the homeless, filled with a camping blanket, hygiene products, socks, and soap. “I consider it a privilege.” She recently heard there’s a pregnant girl on the street, and she hopes she will be able to help her.

She's also looking for customers for her artwork, and can be reached by email at [email protected]

This is the fourth in a series of profiles of homeless people in Evanston. Rick Kinnebrew, formerly with the Evanston Public Library, is a volunteer with Interfaith Action, which supports people who are homeless and hungry in and around Evanston and operates the Hospitality Center at St. Mark's Church.