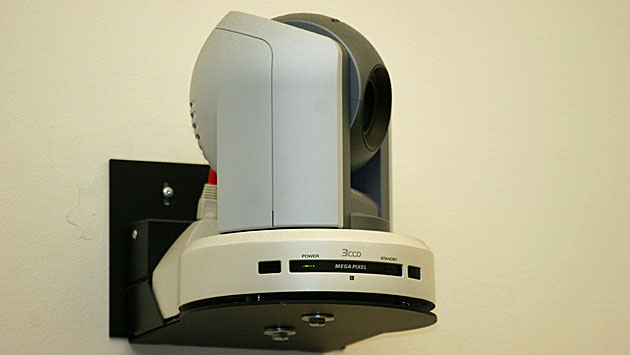 A remote-control camera used for TV broadcasts mounted on the wall of the District 65 board room.

The Evanston/Skokie school district, which expects to spend nearly $105 million on its operations this year, got a quote of $250 per meeting from Evanston Community Television for cablecasting sessions of the finance committee, which met 10 times last year.

Board member Tracy Quattrocki said she favored the greater transparency televising the committee meetings would offer for the public.

And, she said, the City of Evanston has been televising and streaming online all of its major committee meetings for years.

With the board asking citizens to make critical decisions about the future of the schools largely based on budget projections, she added, "I think Evanstonians should see what's happening in the committee."

But Board President Andrew Pigozzi said he had reservations about the idea.

"We don't really approve anything at the finance committee level," Pigozzi said, "The committee just makes recommendations to the full board."

And, Pigozzi noted, the two full board meetings each month are already televised.

He suggested that perhaps the meeting location should be rotated to different schools around the district instead.

Board member Jerome Summers said he likes the current practice of having the finance committee meetings in a roundtable format in the center of the board room, rather than at the fixed desks used for full board meetings.

"People feel free to discuss their issues. It's not as formal as this," Summers said.

The district's communications director, Pat Markham, said the roundtable format could work with the board room's existing camera setup, but that it would require moving microphones from their current positions on the board members' desks.

An additional wrinkle in the plans, Markham said, is that the audio and video gear for the board room now is located in two different equipment closets. So all meeting broadcasts require having a District 65 employee run the audio gear, while an ECTV employee handles the video feed.

The city's meeting broadcasts are handled by a one-person crew.

Markham said she didn't have information on what the cost might be to reconfigure the equipment so one person could operate it all.

Board member Kim Weaver said that at full board meetings now, when finance issues come up "the room empties out" of spectators. But she said the finance committee debates can be the most important thing. "It helps people understand how we got to where we are as a board," Weaver said.

Board member Richard Rykhus said he favored keeping the existing roundtable format for the meetings and having them broadcast, but wanted to hear more details from the administration about exactly how much it would cost.

The board agreed to revisit the issue next month after the administration gathers more detailed cost information.