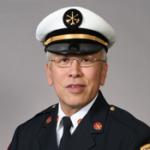 As Evanston Battalion Fire Chief Don Kunita partakes Monday of the traditional coffee-and-cake celebration befitting the retirement of a firefighter after 36 years with the service, he will no doubt reflect upon that major conflagration in the 800 block of Judson Avenue in 1996 that almost ended his life.

He was a company officer at the time and responded to what appeared to be a routine fire call at the condo/apartment building in Southeast Evanston.  The blaze had started in one apartment unit, but quickly the fire got out of hand.

Caught in the interior of the building and unable to see a thing because of the smoke and burning embers, “I became disoriented and caught in heated areas where the fire was rapidly growing and expanding,” he recalls.

“You know you’re in an extremely dangerous situation,” he says, “yet you have to stay calm, even come to a standstill, and refocus your thoughts and your efforts on how you’re going to get yourself out.

“You have your self-contained breathing apparatus and your radio, but essentially you’re blinded, and you know your air pack is only going to last so long.”

He groped his way along an unfamiliar corridor and fell over some debris. From there, he began crawling, not knowing whether he was heading into greater danger or away from the heat. Finally he felt some drapes or venetian blinds that indicated he was at a window.

“That was the greatest feeling in the world,” he said. “I took the window out with an axe and my fellow firefighters put ladders up to me, and I exited through that window.”

In the process, however, he cut himself on the broken glass…even though he was wearing thick gloves… and severed the nerves in his right index finger. He was rushed to the hospital, where surgeons harvested a nerve from his wrist and finger and partially restored feeling to the injured digit.

In this instance, he was lucky, but he still remembers the fire in 1985 that claimed the life of an Evanston firefighter.

“When it’s one of your own,” he says, “it really affects you. You try to help each other. You really look out for each other. You have this understanding in how you approach the job that you are doing.”

Chief Kunita started with the Evanston department in 1976 as a firefighter and was promoted to captain in 1985. He has worked as a fire inspector and investigator and was a state certified evidence technician. He rose to the rank of battalion chief, where he commands a 32-member shift, in 2003.

The battalion chief goes out to all the fire calls during his shift and operates as the point man in charge of the operation, directing the crews on hand and summoning help and equipment as needed.

Sometimes that help comes from neighboring fire departments, such as Wilmette and Skokie. As members of the Mutual Aid Box Alarm System Division III, when a department needs extra help to battle a major blaze, they call upon MABAS dispatchers to send aid.

One of the firefighters on duty at Evanston Fire Station No. 1 on Emerson Street said that Chief Kunita is especially noted for his calmness and quick thinking at the scene of a major fire.

Kunita credits his years of experience for that on-scene calmness. “You still get the rush of adrenalin,” he says, “but you know you have to remain calm, for you need to think clearly. When you’re younger, you’re more apt to be excited, so you’re learning to keep on a straight line and to keep calm, for you’re directing people into different dangerous situations.”

His final thoughts upon retirement? “I really want to compliment my contemporaries, for we really learn from each other. No one person has it all. You’re standing on the shoulders of those who went before you. So much is passed on.”

Said Fire Chief Greg Klaiber: “I would like to thank Chief Kunita for his years of dedicated service to the community of Evanston.”