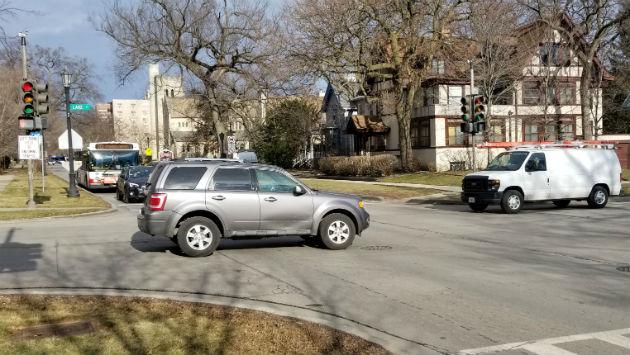 Ridge Avenue has had at least six of Evanston’s 10 worst intersections for traffic accidents over the last five year — and the worst of all at least for the last two years has been Ridge Avenue at Lake Street.

As Evanston Now reported Tuesday, city officials are trying to come up with solutions to reduce the frequency of accidents at Lake and Ridge and elsewhere along Ridge Avenue.

Here’s a map that shows the number of accidents at various intersections along Ridge in 2016.

You can click on any of the map markers to see how many accidents occurred at that intersection in 2015.

Year-to-date data for 2017 for most intersections was not yet available from Evanston police.

Three intersections on Dodge Avenue — at Dempster, Main and Oakton streets — have made the top 10 list at least twice in recent years, as have two on Church Street — at Maple and Sherman avenues as have the intersections of Howard and Asbury and Central and Green Bay.