Your view of the Fountain Square tower project may depend a lot on your time horizon. 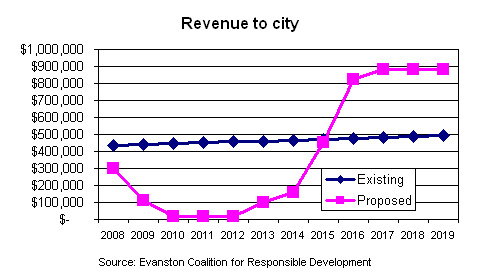 The Evanston Coalition for Responsible Development spent 20 minutes Monday telling aldermen the 49-story tower would be a bad economic idea for the city.

The coalition’s John Kennedy, using an 11-year time horizon, calculated that the city would come out over $900,000 ahead in tax and parking revenue if it sticks with the existing two-story 708 Church St. building.

But that time frame only includes four years after the new building’s scheduled completion.

If the coalition’s own numbers were extended out another decade, they would show a net gain for the city from building the tower of roughly $3 million, and more gains the further out one looks.

And in developing its figures the coalition assumed:

The coalition also fails to account for real estate transfer tax revenue to the city from the initial purchase of the building by the developer, and the ultimate purchase of the condominiums in the new building. That amount is likely to be in the neighborhood of $500,000.

Beyond the tax argument, aldermen heard a range of other issues raised about the tower.

Oliver Gould of 1730 Hinman Ave. said he feared financing for the tower would fall through after the developers had torn down the existing building and the city would be left with a hole in the ground or a half-finished hulk.

But developer Tim Anderson told the aldermen that the existing building would not be torn down until financing to complete the full project was secured.

Nicholas Dunkas, a psychiatrist who said he’s practiced in Evanston for 40 years asked, "Where am I going to go if this building is demolished? What happens to my patients?"

Al Hunter of 1040 Elmwood Ave., a former plan commission member, said he agrees with the minority report from the commission that opposed the tower project. The development "is out of proportion," Hunter said.

But Greg Hummel of 2240 Central Park said he favors the development, calling it an economic engine for the revitalization of downtown. "Capturing the demand for housing of those moving from single family homes to a more urban setting is a valid economic development strategy," Hummel said.