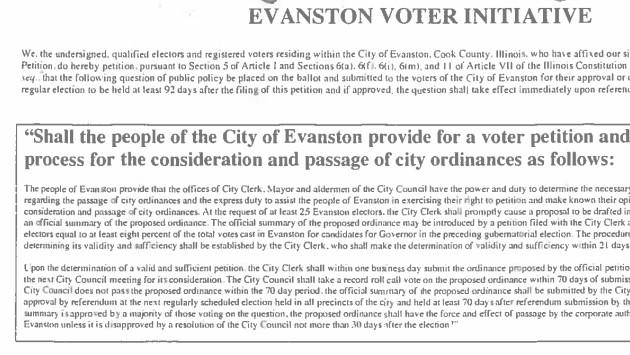 When the Evanston Electoral Board takes up the objection filed against the voter initiative petition tonight one of the arguments will be that the proposal’s wording is confusing.

You might think there could also be a question of whether the text was large enough to be readable and whether voters knew what they were signing.

The 383-word referendum question was presented on the petition form in extremely small type — with about 10 lines of type per inch. That’s just a shade bigger than the agate type that newspapers used to use for stock tables and box scores.

But for better or worse, the Illinois election code doesn’t appear to regulate the size of type on initiative petitions, so it seems unlikely the Electoral Board will get to address that question.

The objectors are expected to mainly focus on the issue of whether the referendum — which appears to set up a binding process for how the City Council would have to respond to future proposals initiated through a referendum — is legal.

The objectors say that the state electoral code requires that voter-initiated referendums be advisory only, while former Gov. Pat Quinn, who circulated petitions for the referendum and is expected to represent the referendum supporters at tonight’s meeting, argues that a state constitution provision authorizes petition drives to place binding referendums on the ballot.

The Electoral Board is scheduled to meet at 6:30 p.m. in Room G300 at the Civic Center.