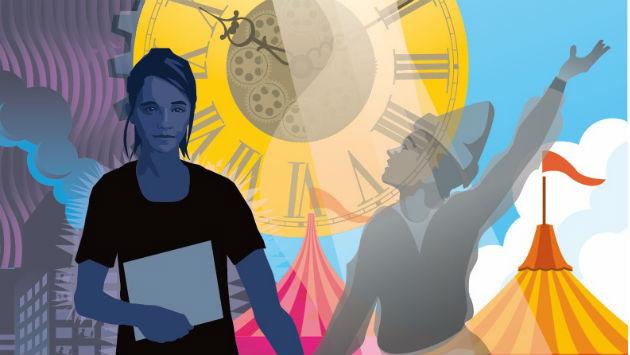 The Actors Gymnasium presents a circus about a girl, her family and her imaginary friend in “All the Time in the World,” while Northwestern University explores romance in “Guys and Dolls.” These are among the performances on stage in an around Evanston this weekend.

All the Time in the World
The 10th annual Winter Circus is a circus about time. Trudy is a young girl who lives a hectic life with her very busy family, and who also has an imaginary friend. When Trudy’s imaginary friend is suddenly too busy to play with her and leaves to join the circus, she and her parents enter the circus paracosm to find more time and reunite Trudy and her imaginary friend.
At Actors Gymnasium, Noyes Cultural Center, 927 Noyes St., runs Feb. 16 through March 24, tickets $30-60

Guys and Dolls
This classic romantic comedy comes to life with a modern lens that takes us from the heart of Times Square, to the cafes of Havana, Cuba, and even into the sewers of New York City and leaves us asking what it really means to be a Guy… or a Doll.
At Barber Theater, 30 Arts Circle, runs Feb. 15 through March 3, tickets $30

Steve Rashid and the Porkpies
Studio5 Artistic Director Steve Rashid is back with a performance featuring his own compositions and some of his personal favorites by other artists, with an emphasis on the music of Nat “King” Cole, as we celebrate Nat’s centennial this year. This concert will be recorded live for Chicago Jazz Live on WDCB.
At Studio5, 1938 Dempster St., Friday, Feb. 15, tickets $20-25

May The Road Rise Up
Shannon O’Neill’s newest play shows the consequences of a community that fails to communicate, and how refusing to grieve can lead to tragedies of its own.
At The Factory Theater, 1623 W. Howard St., Chicago, runs Feb. 15 through March 30, tickets $25

Ma Rainey’s Black Bottom
This visceral American classic serves as the 1920s chapter of August Wilson’s epic American Century Cycle. What begins as a routine recording session becomes more strained as tensions rise between the members of a blues band and the owners of the recording studio. The white producers mean to exploit the talents of the band—especially the gifted and impulsive Levee—but when Ma insists on having things her way, tensions are inflamed and the play builds to an unexpected and searing climax.
At Writers Theatre, 325 Tudor Court, Glencoe, runs through Mar. 17, tickets $60-70

Seussical
In this fantastical, magical musical, some of your favorite Dr. Seuss characters are lovingly brought to life with the Cat in the Hat, Horton the Elephant, Gertrude McFuzz, Lazy Mayzie and all of the Whos of Whoville. These classic, colorful tales are brought together by Jojo, a young “thinker of strange and wonderful thinks.”
At Marriott Lincolnshire, 10 Marriott Drive, Lincolnshire, runs through March 31, tickets $18