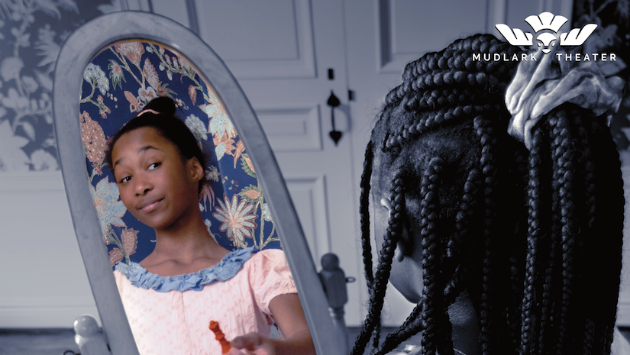 The Noyes Cultural Center is overflowing this weekend with “Through the Looking Glass” by Mudlark Theater, “ABCD” and “Mad Like Us,” performed by Piven Theatre Workshop, and the continuation of “All The Time in the World” from Actors Gymnasium. Or take in one of many other performances on stage in and around Evanston this weekend.

Through the Looking Glass
Alice is back in this sparkling adaptation of the sequel to “Alice in Wonderland.” In “Through the Looking Glass,” Alice reunites with some familiar faces, while encountering a whole chessboard of absurd new players including Humpty Dumpty, Tweedledee & Tweedledum, and the formidable Red Queen. Join Mudlark as we journey into this madcap tale of self-discovery, absurdity, and pretend.
At Mudlark Theater, 927 Noyes St., runs March 8-23, tickets $11-14

ABCD/Mad Like Us
ABCD, an acronym for “American-Born Confused Desi”, is playwright/performer Rukmini Girish’s exploration of her identity as an Indian immigrant to the United States, the effect this has had on her perception of herself, her queer identity, her professional life, relationships with family, and her place within the Chicago arts community.
Mad Like Us invites us into the thin places. According to Celtic tradition, heaven and earth are only three feet apart, but in these thin places, that distance is even shorter. The very edge of a cliff on the wild west coast of County Kerry. A sandstone slot canyon in northern Arizona. Montrose Harbor at sunrise. When three sisters are separated and sent far from their hometown in Ireland, they seek out thin places in order to find one another again. And again.This modern Celtic myth is written and performed by Gillian Hemme.
At Piven Theatre Workshop, 927 Noyes St., Monday and Tuesday, March 10-11, tickets $15

All the Time in the World
The 10th annual Winter Circus is a circus about time. Trudy is a young girl who lives a hectic life with her very busy family, and who also has an imaginary friend. When Trudy’s imaginary friend is suddenly too busy to play with her and leaves to join the circus, she and her parents enter the circus paracosm to find more time and reunite Trudy and her imaginary friend.
At Actors Gymnasium, Noyes Cultural Center, 927 Noyes St., runs through March 24, tickets $30-60

Madeleine Peyroux and Paula Cole
A special double-bill concert featuring two of the music industry’s most sophisticated female artists known for their seamless ability to sing in both the standard jazz and mainstream pop genres. Don’t miss the return of Madeleine Peyroux to the North Shore Center along with Grammy-winner Paula Cole.
At Northshore Center for the Performing Arts, 9501 Skokie Blvd. Saturday, March 9, tickets $55-75

Danceworks 2019
The best of dance at Northwestern University is always on full display each year at the annual Danceworks concert featuring new works in a variety of styles including contemporary, ballet and jazz.
At Josephine Louis Theater, 20 Arts Circle Drive, runs through March 10, tickets $25

When She Had Wings
A fiercely determined young girl and aspiring pilot named B. has decided that she must realize her destiny to fly before turning ten. In a makeshift airplane built in her backyard treehouse she recounts the thrilling and legendary victories of her hero, Amelia Earhart. That night following a tremendous summer thunderstorm, a mysterious birdlike visitor takes up residence in her imaginary cockpit and B. wonders if the strange creature may be an incarnation of her hero and inspiration to finally take flight.
Part of the Imagine U series, at Wallis Theater, 1949 Campus Drive, runs Feb. 24 through March 10, tickets $10-12

May The Road Rise Up
Shannon O’Neill’s newest play shows the consequences of a community that fails to communicate, and how refusing to grieve can lead to tragedies of its own.
At The Factory Theater, 1623 W. Howard St., Chicago, runs through March 30, tickets $25

Ma Rainey’s Black Bottom
This visceral American classic serves as the 1920s chapter of August Wilson’s epic American Century Cycle. What begins as a routine recording session becomes more strained as tensions rise between the members of a blues band and the owners of the recording studio. The white producers mean to exploit the talents of the band—especially the gifted and impulsive Levee—but when Ma insists on having things her way, tensions are inflamed and the play builds to an unexpected and searing climax.
At Writers Theatre, 325 Tudor Court, Glencoe, runs through March 17, tickets $60-70

Seussical
In this fantastical, magical musical, some of your favorite Dr. Seuss characters are lovingly brought to life with the Cat in the Hat, Horton the Elephant, Gertrude McFuzz, Lazy Mayzie and all of the Whos of Whoville. These classic, colorful tales are brought together by Jojo, a young “thinker of strange and wonderful thinks.”
At Marriott Lincolnshire, 10 Marriott Drive, Lincolnshire, runs through March 31, tickets $18