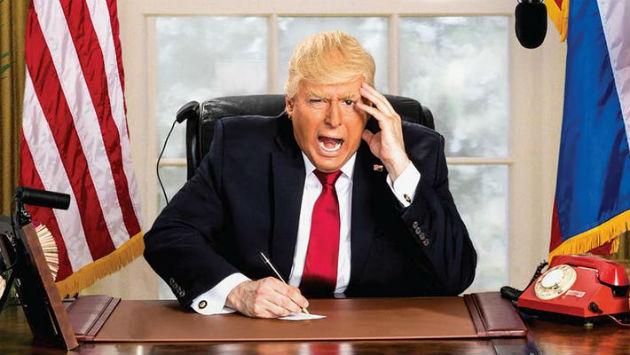 Anthony Atamanuik brings political humor to SPACE. Elvis Presley appears at the North Shore Center and in the “Million Dollar Quartet” at the Marriott in Lincolnshire. For a different guitar sound, Jesse Cook offers nuevo flamenco guitar, also at the North Shore Center. And Mudlark Theater takes on Shakespeare, sort of. These are among the shows on stage in an around Evanston this weekend.

Trump Dump: American Tantrum Book Tour
Trump is President and he’s giving a luxurious speech from the East Room of the White House. Join him and his paid audience as he updates America on the Hunt for Rosie O’Donnell, the construction of the first ever transcontinental hair oil pipeline and his plan for bronzing illegal immigrant’s babies and using them for actual ships anchors. Bring your questions and the Don will answer them.
At SPACE, 1245 Chicago Ave., Thursday, Jan. 17, 7:30 p.m., tickets $20-30

Million Dollar Quartet
This Tony Award-Winning musical is set on December 4, 1956, when an extraordinary twist of fate brought Johnny Cash, Jerry Lee Lewis, Carl Perkins and Elvis Presley together at Sun Records in Memphis for what would be one of the greatest jam sessions ever.
At Marriott Lincolnshire, 10 Marriott Drive, Lincolnshire, runs Jan. 16 through March 16, tickets $50-60

Jesse Cook
Back by popular demand, Jesse Cook is one of the most influential artists in the world of nuevo flamenco. Cook fuses his virtuosic flamenco guitar techniques with jazz, rock, rumba, gypsy, tango, salsa and other forms of world and popular music.
At North Shore Center, 9501 Skokie Blvd., Skokie, Friday, Jan. 18, tickets $39-59

The Tragedy of Harriet Denmark, co-chair of the Elsinore Middle School Theatrical Society: A Comedy
Harriet Denmark is on a mission. When a new co-chair, Calvin, starts to push the Elsinore Middle School Theatrical Society away from Shakespeare and towards musicals, co-chair Harriet Denmark becomes convinced that foul play is to blame. She decides she must sabotage and rewrite the upcoming talent show to tell the world the truth about Calvin (or at least the truth according to her pet rat who’s lost somewhere in the theater). Harriet brings Hamlet and Noises Off together in a middle school drama club.
At Mudlark Theater, at Red Curtain Theater, 1417 Hinman Ave., Jan. 17-20, tickets $10

The Full Monty
Based on the cult hit film of the same name, a group of unemployed steelworkers from Buffalo come up with a bold and unclothed way to make some quick cash. In preparing, they find themselves extremely exposed… not merely physically but also emotionally.
At Theo Ubique, 721 Howard St., runs through Jan. 27, tickets $25-50