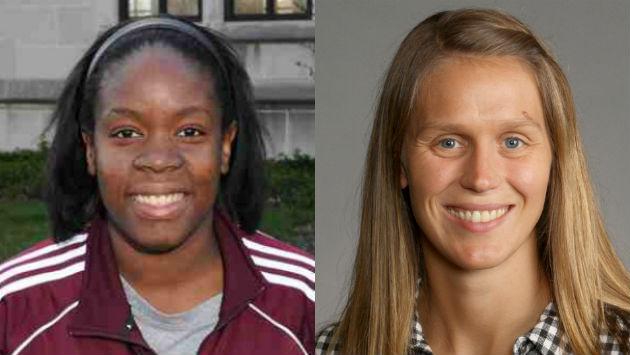 Mallory Thelander and Brittanny Johnson are both ready to take on new challenges in their coaching careers.

The District 202 Board of Education Monday night approved the hiring of Thelander as head girls volleyball coach and Johnson as head girls basketball coach at Evanston Township High School.

Both women will be stepping into those positions for the first time at the high school varsity level, although Johnson will make her transition after serving as the head coach at Kennedy-King College in Chicago the past three years.

Evanston Athletic Director Chris Livatino said he’s excited about the long-term prospects for both women to grow into their respective roles.

“We’re hiring two young coaches, and our hope and our vision is that they’ll lead the programs for a long time to come,” Livatino said. “I’d love to see them both still coaching here 15 or 20 years down the road.

“I’m excited about Brittanny’s hiring because she’s played at an extremely high level (at Fenwick High School and Boston College). She comes from a winning high school program and she understands what it takes to succeed at that level. She turned around the program at Kennedy-King in a short amount of time, and she was a brilliant student-athlete who has already demonstrated her leadership skills.

“As far as Mallory goes, it’s awesome to have a former Evanston athlete return to the program. I coached Mallory in high school and she was a very intense player, a hard-working kid. I expect she’ll be that same type of leader now. She’s very passionate about building our program up and she’s already worked in a program (at Loyola Academy, where she’s a math teacher) that has achieved some success (4th in the state in 2014).”

Thelander is a 2006 ETHS graduate who earned four varsity volleyball letters at Augustana College in Rock Island. She was a second-team all-conference selection in 2007 and was named to three different all-tournament teams during her college career. She also received all-conference academic recognition her final three seasons with the Vikings.

Thelander has served as an assistant high school coach at De La Salle, Loyola and Evanston. She worked with former Wildkit head coach Pam MacPherson, who stepped down after 10 years at the helm, as a varsity assistant during the 2013 season and has also coached in the boys program at ETHS.

“I remember one day at practice Pam mentioned to me that some day you’re going to be the next Evanston coach, and I thought she was crazy,” Thelander recalled. “Ever since I graduated I’ve wanted to come back, and this is an opportunity I couldn’t pass up. I want to make it very clear that I bleed Orange and Blue, just like Coach Livatino did back when he was coaching me. It’s always been a goal of mine to be a head coach, and once the opportunity arose I knew I couldn’t ask for a better place to be.”

Thelander will inherit a team that must rebuild after graduating every starter, and a total of 7 seniors overall, from a varsity squad that finished 16-20 in MacPherson’s final season. Two current sophomores, setter Sam Kaiser and outside hitter Clara Seibert, could be impact players next fall and two other underclassmen, sophomore setter Holly Desmond and freshman libero Siena Prokopenko, did earn some playing time in the regional tournament after being promoted late in the season from the JV team.

Thelander said she plans to lean on the experience of the current varsity staff, including boys head coach Mike McDermott, in an effort to take the program to the next level.

She also plans to promote the sport within the community to help keep Evanston’s participation numbers at a competitive level.

“I want to get my face out there to the middle schools. It’s important to get to those kids when they’re young and making the right connections, getting them to buy into the Evanston volleyball tradition. I’d also like to get some of our alums involved back in the program, to help motivate the girls and show them what the program can be like,” Thelander added. “There are so many things I want to achieve here.”

That’s the kind of passion that Johnson plans to bring to the basketball program for a team that should be ranked in the top 10 in the state of Illinois. All five starters, including career leading scorer Leighah-Amori Wool, are returning from a team that compiled a 23-6 won-loss record and bowed to Trinity in the sectional tournament semifinals.

Johnson herself was an All-State basketball player at Fenwick (Class of 2005) who attended Boston College but saw her playing career prematurely come to an end when she suffered a torn ACL that required three separate surgeries.

She served as team captain at BC for three years and, despite the injury, did have some opportunities to play overseas after graduation.

“That injury really did change my career,” Johnson recalled. “Minus that injury, I definitely could have had a professional (playing) career. But I don’t regret it because it launched me into my coaching career. I’ve always been around coaching — my Dad coached my brothers at Morgan Park — and during my time off with the injury I developed a love for the scouting, the skill development and the recruiting, especially the skill development. I really liked the lifestyle and I even turned down an economics job (her college major) because I really wanted to coach.

“I played for a great coach at Fenwick (Dave Power) and the coaches helped me develop so much after I came to BC as just another skinny kid. I had to get better every year, and that’s what I’m looking forward to at Evanston. My hope is that every single person who comes into the program will get better every year. It’s not easy, but every single program I’ve been part of that’s been a success has had that happen because we worked super hard.”

At Kennedy-King, Johnson turned around a program that was 3-21 under the previous staff to a nationally-recognized junior college program with a two-year record of 41-12. That included two straight conference championships.

“It’s hard for me to leave Kennedy-King because we had started to build something there,” Johnson said. “You scratch the surface a little working with those players, and they’re gone after a couple of years.

“What I love most about coaching is the skill development, watching a freshman or a sophomore grow and become the best player as a senior. When I saw that the Evanston job was open, it reminded me so much of Fenwick and the situation there, and it was almost like a perfect fit for me.

“I know there are expectations for next year (at ETHS) but I don’t think about the pressure at all. My goal is to add value to what’s already there. We’ll do whatever we can to meet those expectations.”