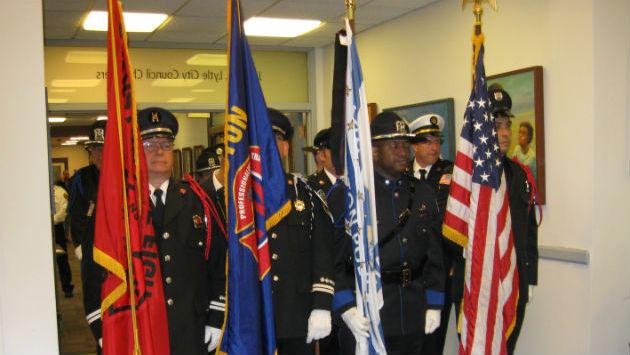 The Evanston Fire Department paused Friday to pay homage to three firefighters who lost their lives protecting the citizens of Evanston.

It’s a ceremony they repeat every year on July 22, the date in 1985 when firefighter Marty Leoni died in an attempt to rescue a child he thought was inside a house that was ablaze at 1927 Jackson Ave.

The other two men–William Craig and George Stiles—perished battling a fire at a factory at the corner of Dodge Avenue and Dempster Street on Dec. 13, 1905. 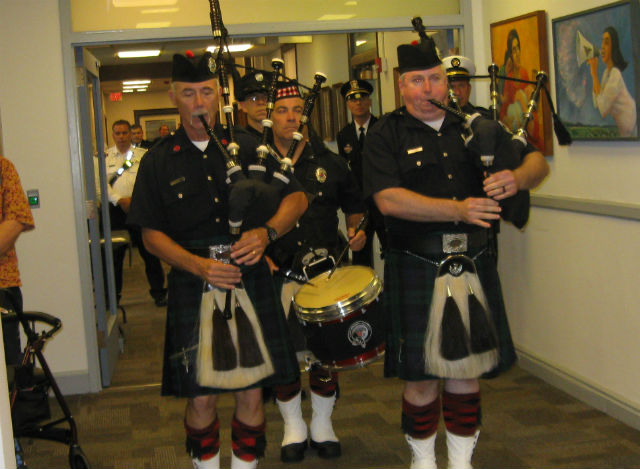 The Associated Firefighters of Illinois District 8 Pipes & Drums performed at the ceremony.

Fire Chief Greg Klaiber, who presided at the ceremony in the City Council chambers at the Lorraine H. Morton Civic Center, said the men were “just doing their jobs” when the alarm sounded and they went on their way, as happens dozens of times every day in Evanston.

Said Mayor Elizabeth Tisdahl: “The community loves you and appreciates you.”

In addition to the three who died battling fires, the department also presented badges to the families of other Fire Department personnel who perished as a result of job-related illnesses, including Joseph Hayes, Patrick Reif, Peter Hanshar, James A. Cox, and George Dwyer.