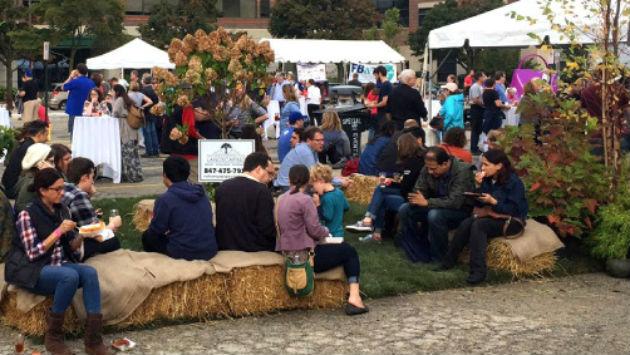 Craft beer, local food live music and activities for kids will all be part of the third annual Evanston Oktoberfest celebration downtown from 1 to 6 p.m. Sunday.

Attendees will receive a commemorative flight glass to sample pours from 10 breweries, 3 cider companies and a special seasonal cocktail from FEW Spirits.

Also this weekend, the Chicago Architecture Foundation’s Open House Chicago, on Saturday and Sunday, features 16 sites in Evanston and two more nearby — the Baha’i House of Worship in Wilmette and the CTA Skokie Shops.  Last year that event drew 20,000 people to Evanston.

So, you could spend the morning Sunday touring architectural sites and treat yourself to beer, food and music in the afternoon.

Festival headliner The War & Treaty, with Michael and Tanya Trotter, create a fusion of sounds such as piano, mandolin, bass, resonators and dobros presented in various genres such as Folk, Americana, Blues, Roots and Soul. They’ll perform from 4:30 to 5:30pm.

Gather, a creative play space in downtown Evanston, is organizing fall arts and crafts activities for kid at the fest.

This year, admission tickets to Evanston Oktoberfest are $10 for general admission and $15 VIP for early access to the fest at 1 p.m. and special seasonal beers from some of the breweries. Drink tickets are separate from admission and can be purchased online or at the event.

Evanston Oktoberfest will take place at the parking lot behind the Hilton Garden Inn at 1818 Maple Ave., the location of the Downtown Evanston Farmer’s Market.

The site is three blocks from the Davis Street CTA and Metra stations. For those with a designated driver, there’s free Sunday parking in the Maple Avenue garage, adjacent to the site and bike parking is also available on the first floor of the parking garage. Please note that dogs are not allowed at the fest.

Evanston Oktoberfest is a fundraiser for Downtown Evanston, a nonprofit organization that manages and markets the downtown Evanston business district.