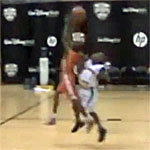 The team, which will appear at the Community picnic at the Evanston Civic at 2 p.m. on Sunday, Aug. 26, defeated the WPC Elite team from Baltimore 42-38 in the final game of the Amateur Athletic Union tournament at ESPN/Disney Center in Orlando, wrapping up an undefeated seven-game season.

Team Battlecats was founded in 2010 by Travis Ransom and Chris Tobin.

Their goal wasto teach the game they love while emphasizing academics and family.

Chris “Scottie” Bull was hired to coach the team in a rigorous schedule. The team practices three to four
times a week at various Evanston locations from January to August and travels regularly to play other teams in the Midwest.

Tobin says, “This is the most special moment of my involvement in Evanston basketball and the greatest group of boys in fifteen years of coaching.”

And Bull adds, “We will all never forget the moment when the final buzzer went off. It’s something
these kids will remember for a lifetime.”