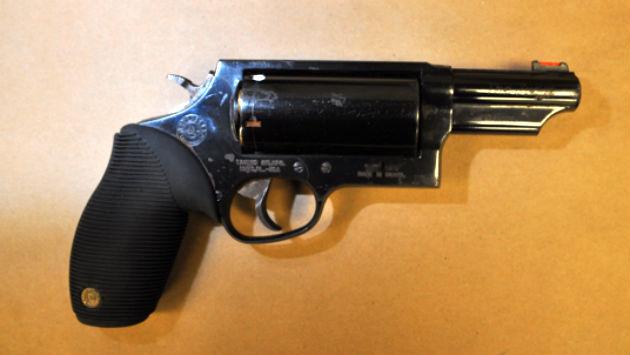 Evanston police say officers arrested three robbers Tuesday evening as they tried to force a woman to withdraw cash from an ATM machine at the Bank of America branch at 1336 Chicago Ave.

Police Cmdr. Joseph Dugan says that ,alerted by a 911 call, responding officers saw two male subjects standing near an idling vehicle in the parking lot and a woman in the ATM vestibule with a male subject who had a towel covering his face.

When the two males observed the patrol car, they fled on foot southbound on Sherman Avenue.

When the man and woman left the ATM area, an officer saw that the man had his hands in his waistband area. Dugan says the officer gave the male subject several verbal commands to remove his hands from the front of his waistband, which were met with negative results.

The officer and a back-up officer were forced to take physical control of the male subject, who is 19 years old and a resident of Evanston and take him into custody, during which time a loaded .410 caliber Taurus revolver was recovered from his waistband.

The female, who is 41 years old and a resident of Evanston, said that she was approached by the subjects who displayed a handgun and demanded she withdraw $200.00 from the ATM.

Responding officers searching for the subjects that fled the parking lot on foot, located one, a 20-year-old male Evanston resident inside the Dempster Street CTA station.  The second, a 17 year old Chicago resident, was located on the roof of a building in the 1300 block of Sherman Avenue by the Evanston Police canine. The vehicle that was idling in the parking lot was discovered to have been reported stolen out of Chicago.

All three subjects were transported to the Evanston Police Department for further investigation.  The victim was not injured in the incident.

Names of the two adults arrested are expected to be released once formal charges are filed.