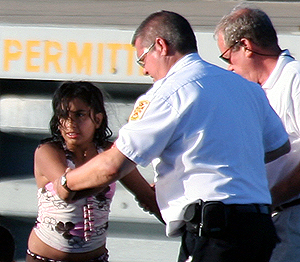 Emergency crews rescued three people from Lake Michigan early this evening after they jumped off their motor boat trying to rescue a dog that had fallen overboard.

(Above: A firefighter helps one of the rescued boaters onto the Church Street boat ramp dock.)

Evanston Fire Chief Alan Berkowsky says rescue crews first learned of the incident when a young woman, the only person left on the boat, called 911 on her cell phone.

Berkowsky says the white and green speedboat was between 1.5 and 2.5 miles off shore south of the Dempster Street beach.

Lifeguards aboard a beach rescue boat headed to the scene as did firefighters on a wave runner. A Coast Guard boat from Wilmette was also called to the scene and a Chicago Fire Department helicopter with jump divers on board also responded.

It’s believed the beach rescue boat was first to arrive at the scene. The Coast Guard boat brought the three people who’d gone overboard — a 10-year-old girl, a 22-year-old woman and a 26-year-old man — back to shore at the Church Street boat ramp.

The beach rescue boat towed the boat they’d been on back to shore, with the woman who’d called 911 steering it and the dog who’d gone overboard inside. 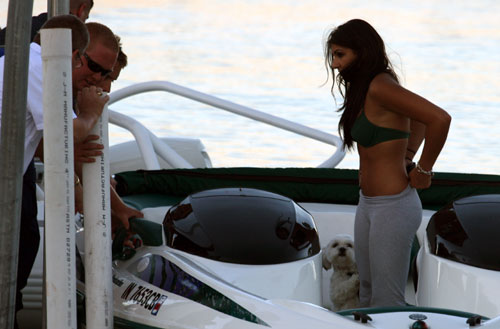 Berkowsky says the three people who went overboard, who were not wearing life jackets, were in the 57 degree water for 20 to 25 minutes.

The boat was not equipped with a radio, safety kit or flares.

The people rescued on the boat were checked over by fire department paramedics in an ambulance at the beach and later declined to talk to a reporter about their experience.

Berkowsky said it was the city’s first water rescue of the season and that close coordination among the rescue agencies helped bring it to a successful conclusion.