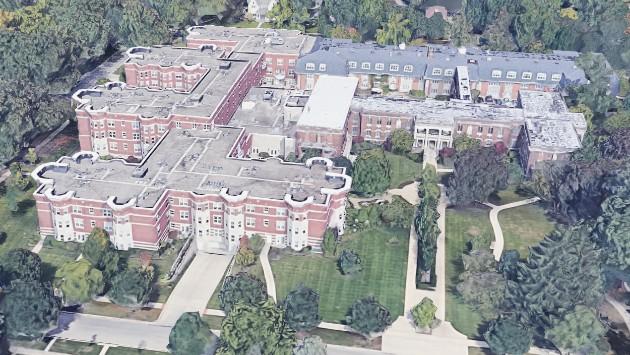 Officials have submitted preliminary plans to the city to construct a three-story, 209,000 square-foot addition to the property at 2323 McDaniel Ave.

The plans would also add 125 underground parking spaces on the block-square site, which is bounded by McDaniel Avenue, Colfax Street, Pioneer Road and Grant Street.

It would require demolition of the oldest portion of the Three Crowns complex, known as Pioneer Place, which dates to 1909 and is designated an Evanston landmark.

City officials say they’re waiting to receive additional information from Three Crowns before starting to act on the proposal.

As a planned development, the project will require review by the city’s Design and Project Review Committee and Plan Commission, and the demolition proposal will also be reviewed by the Preservation Commission. A final decision on the plans will be up to the City Council.

Robert Mark, who lives across the street from Three Crowns at 2400 Grant St., says he was distressed about plans for the McDaniel Courts expansion, which he said initially didn’t call for any parking and that opposition from him and other neighbors led to the addition of underground parking for that develoment.

A Three Crowns official didn’t immediately return a call from Evanston Now this morning seeking comment on the expansion plans.

Three Crowns received $56 million in tax-exempt bond loans through the Illinois Finance Authority to fund the McDaniel Courts development. Minutes of a February 2017 meeting of the authority indicate that by that point Three Crowns had paid off $21 million of the debt and was seeking to refinance the rest to achieve interest rate savings and fund some additional improvements.

The minutes indicate that the retirement community then had an 88 percent occupancy rate with 214 residents and had seen 6.27 percent compound annual revenue growth over its prior three fiscal years.