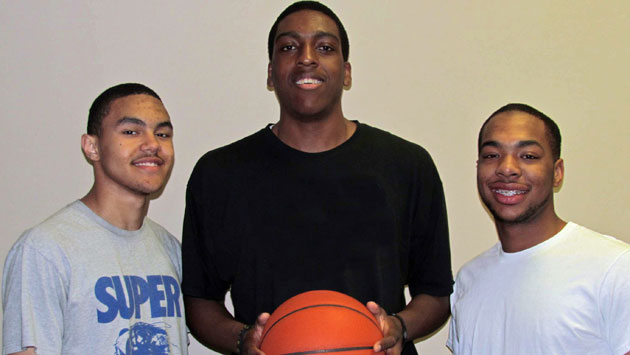 The three, from left in the photo above, are Clarke Rosenberg, James Farr and Garrett Jones.

Farr has verbally committed to Xavier University for the 2012-2013 school year. Before joining the Xavier Musketeers on a basketball scholarship, Farr will continue his education and basketball career at a prep school to be determined in the near future.

He led the Wildkits this past year with 10.4 rebounds per game, and finished second in scoring with an average of 12.6 points per game.  He was voted league MVP and first team All-Conference CSL-South this past season.

His outstanding senior season generated offers from Ball State, Bradley, Loyola, Nevada, and Wisconsin-Green Bay. “I look forward to a year from now, and the opportunity to play for a great coach, Chris Mack at Xavier," Farr said.

Jones will be a Wildcat next year at the University of New Hampshire. He was a four-year varsity basketball player at ETHS, and was a member of the team that finished third in State in 2008.

He has led the varsity team in scoring each of the past three years. Jones was selected first team All-Conference CSL-South for his efforts and finished with a career high – and school record – of 51 points his junior year.

Drawing interest from several schools, he received scholarship offers from Loyola University, Wisconsin Green-Bay and Toledo University; Garrett chose to wait out his options.  He found the University of New Hampshire to be a perfect fit that later offered him a scholarship after the season.

He will be playing point guard under Coach Bill Herrion.  “I believe I will have a successful career at the University of New Hampshire, both in the classroom and competing for the men’s basketball team,” Jones said.

Rosenberg has played basketball from a young age.  He has moved up each year at ETHS, from the freshman team to the sophomore team and two years of varsity basketball.  He helped lead his team to a CSL-South Conference championship in 2011.  He had a breakout game at Northwestern, scoring 23 points vs. New Trier.  Chicago State made a commitment to Clarke from that point on.