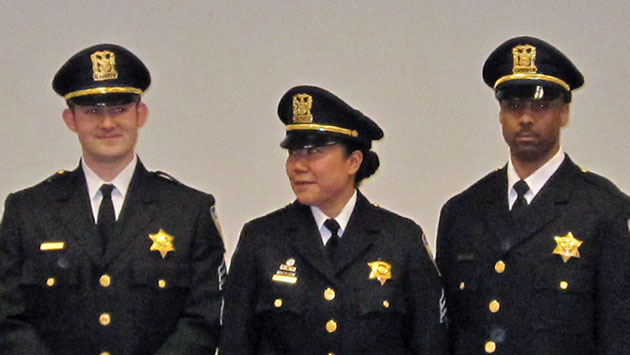 The three were sworn in to their new positions in a ceremony at the Fire Department's administrative training room this afternoon.

Officer Campbell was hired as an Evanston police officer in September 2003. While attending the Chicago Police Academy, Officer Campbell was awarded the Outstanding Recruit Award. While serving in the patrol division he was certified as an evidence technician in March of 2006, and he's provided instruction on evidence collection procedures for the department's Citizen Police Academy.

Campbell earned a masters in business administration degree from the University of Phoenix in 2009.

Detective Wright was hired as an Evanston police officer in January 2002. He initially served in patrol operations and was certified as field training officer.

In January 2005 Wright transferred to the department's Neighborhood Enforcement Team, whose mission was to target drugs and gangs in Evanston. He's been in the Detective Bureau since July 2009.

Detective Sacluti was hired as an Evanston Police Officer in October 2003. She initially served in patrol operations until joining the Neighborhood Enforcement Team in January 2006. She's been in the Detective Bureau since May 2008.

Sacluti has been awarded three Honorable Mentions, two Unit Citations and a Joint Operations award from the Chicago Police Department. She is working on her master’s degree in public administration from DePaul University.