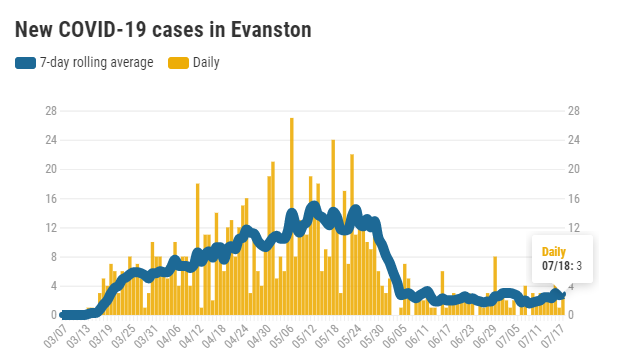 State health officials reported this afternoon the COVID-19 case tally in Evanston rose to 834 or three more than what the city had reported on Friday.

The city’s health department had not released updated statistics for the day as of 3:45 this afternoon. As of Friday it was reporting 831 cases here, while on Friday the state said Evanston had 828 cases. On Friday the city said Evanston had experienced 71 COVID-19 deaths, unchanged from the day before.

The Illinois Department of Public Health says test results for 46,099 people were reported today, another daily record, up from 43,692 on Friday. The positive rate statewide today was 2.8% compared to a seven-day average rate of 2.9%