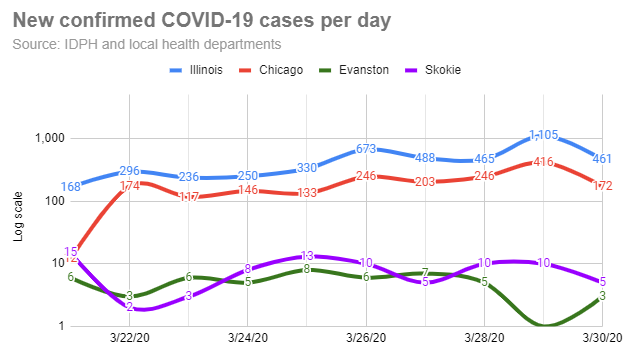 Reported new COVID-19 cases today across Illinois dropped by more than half from the count reported on Sunday, but Gov. J.B. Pritzker said it is far too early to suggest that represents a trend. Evanston reported three new cases today, compared to one on Sunday.

Pritzker and Illinois Public Health Director Dr. Ngozi Ezike that, among other factors, differences in whether various labs meet the 10 a.m. deadline for reporting new cases to the state can create major fluctuations in the daily count. It would take several days, they said, to know whether an apparent decline represents a true sign of progress in combatting the novel coronavirus disease.

The total number of confirmed cases in Evanston now stands at 71. The statewide total is now 5,057.

Eight new deaths were reported across the state today, including that of an inmate at the Statesville Correctional Center.

The dead today included four Cook County residents, two from Will County and one each from DuPage and Kendall counties. They included five men in their 50s and 60s and three women in their 60s and 70s.

Pritzker and Chicago Mayor Lori Lightfoot said plans are moving ahead to open McCormick place as a temporary hospital to handle an anticipated overflow of coronavirus patients with several hundred additional beds expected to be available within about a week.