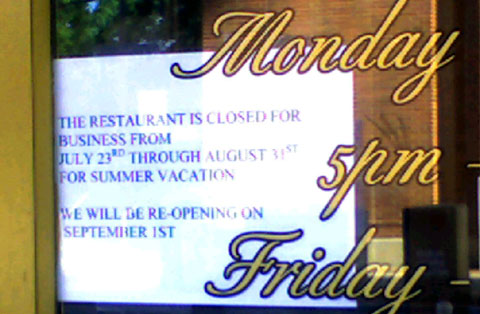 Signs posted Wednesday on the doors at Omaggio, Uber Burger and La Petite Amelia said the restaurants were closing "for summer vacation" and would re-open on Sept. 1.

But the shutdown reportedly took employees by surprise and left an estimated 50 people out of a job.

The restaurants are all owned by Robert LaPata and are located in the Carlson Building at Church Street and Orrington Avenue. Building owner Cameel Halim of Wilmette Real Estate Co. is reportedly a major investor in the three dining spots.

A knowledgeable source in the Evanston business community said it’s believed a financial disagreement between Halim and LaPata may have led to the closures.

Calls this morning to Halim and LaPata were not immediately returned.

Summer can be a slow time for downtown restaurants, since few students are on the nearby Northwestern University campus.