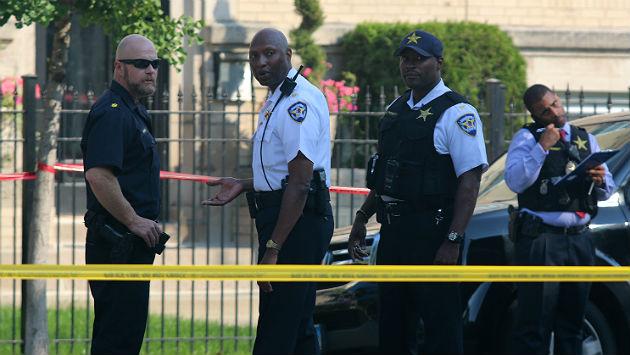 Evanston police and fire units responded to Howard and Custer just before 3 p.m. this afternoon where three people were struck by gunshots.

Police kept traffic in the area blocked off through the afternoon.

Update 4:00 p.m.: Reportedly surveillance video showed that a sedan heading southbound on Custer pulled up beside a southbound SUV and a man in the sedan started firing into the SUV.

Police recovered shell casings in front of a building at 112 Custer Ave.

Two of the shooting victims were transported to St. Francis Hospital, one by a Chicago ambulance the other by an Evanston ambulance.

Evanston paramedics transported the third victim, who’d reportedly suffered a relatively minor gunshot wound to the shoulder, to Evanston Hospital where he declined treatment for his injury.

Police still have all streets in the vicinity blocked to traffic, including Dobson Street as well as Custer Avenue and Howard Street.

Glew says all three men are expected to survive.

The three victims are described as being between 18 and 25 years old. Glew says it’s not clear whether they are Evanston residents.

He says the three are all believed to be gang members, and the shooting is being investigated as gang-related.

He says police believe a rifle was used in the shooting.

After the shooting, Glew says, the victims’ red SUV continued south on Custer and crossed Howard, stopping in the 7500 block of Damen Avenue after being involved in minor traffic accident.

The silver sedan with the gunman fled west on Howard Street.