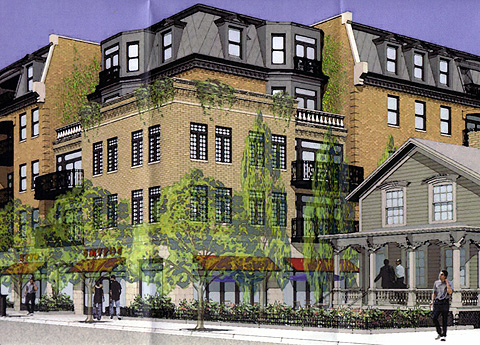 A rendering showing the redesign of the northwest corner of the site.

Michael Horvich of 2635 Poplar Ave. called the five-story, 55-unit project “a huge elephant on the streetscape.”

“I like circuses,” Mr. Horvich told the Plan Commission, “but this project will tower over and invade the privacy of nearby single-family homes, worsen serious parking, traffic and safety problems and will degrade a pedestrian-friendly shopping area.”

But Tim McGuire of 1708 Harrison St. said the project “is a great design that will improve a really rundown section of Central Street.”

“Something like this will bring in additional tax dollars and improve the quality of the neighborhood. It will increase the value of homes and make the area a better place to live,” Mr. McGuire said.

The developers offered new renderings of their design.

One showed a setback of the facade above the third story level at the northwest corner of the building, which the developers said was a response to neighbors’ concerns about the bulk of the project.

Plan Commission Chairman Albert Hunter said, “This is one of the sticking points I had about the first design — what’s the visual impact on people moving down Central Street. This reduces that impact dramatically.”

(A view of the earlier design is here.) 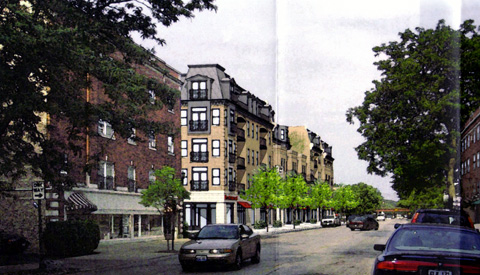 Another rendering was intended to compare the scale of the proposed new building to that of older apartment buildings nearby, although some neighbors disputed the accuracy of the comparison. The proposed building would be 57 feet tall, the maximum permitted with planned development allowances in the property’s B2 zoning district.

Traffic
City Transportation Director John Burke in a memo presented at the hearing reported that the project is expected to more than triple traffic in the alley behind the site — from 17 to 60 vehicles per hour at the peak afternoon rush hour.

He said the alley is narrow — about 13-feet-8 inches wide — but that with garage aprons and parking areas along the alley cars can pass each other safely.

Utility poles also reduce the alley’s width, and developer John Crocker said he plans to work with Commonwealth Edison to get the utility service placed underground. 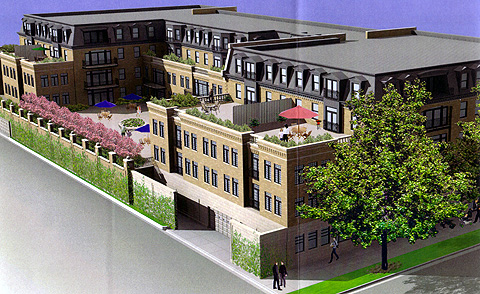 Mr. Burke said the planned 1.5 foot setback of the new building from the alley property line would also help with traffic access. He said the alley could also be made one-way, but that’s a decision usually made in consultation with neighbors. He also said that reducing the extent of the walls screening the loading dock would make access there easier and reduce the likelihood that trucks would block the alley while loading and unloading.

Although several neighbors voiced fears that the project would create parking problems in the neighbohrood, Mr. Burke said a city parking study indicates there is enough parking capacity for both shoppers and residents in the area.

John Enright, owner of the Bluestone restaurant at 1932 Central St., said he favors the project and hopes to be able to lease space in the proposed building to open another restaurant, which would serve Mexican food.

Chris Carey, of 2739 Girard Ave., who chairs the city’s Preservation Commission, said he believes the project has been sensitively designed by people who care about Evanston and care about historic preservation.

He noted that the Preservation Commission has already approved the developers’ plans to restore a Victorian cottage on the west end of the site.

But retired architect Gregory Mayer of 2635 Poplar Ave. said the design “manipulates and takes advantage of the site to serve the developers’ purposes.”

The Plan Commission is scheduled to hear more testimony on the project at its Sept. 13 meeting.