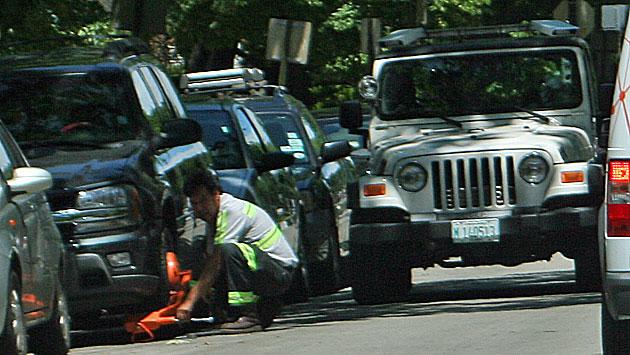 Evanston aldermen later this month will get a proposal to reduce from five to three the number of tickets needed to make a car eligible to be booted.

The idea was approved by the city’s Transportation and Parking Committee last week.

Parking and Fleet Manager Rickey Voss told the committee that the city’s seeing more issues with out-of-town construction workers working on large projects in the city collecting tickets and then moving on to other jobs elsewhere before they have to pay up.

Voss said some appear to even be switching to driving a different car to the jobsite after the first vehicle has picked up enough citations to be boot-eligible.

Nearly half the vehicles with five or more Evanston parking tickets outstanding are registered to addresses outside the city, Voss added.

Alderman Melissa Wynne, 3rd Ward, said she had some concern about lowering the boot threshhold — because getting booted seems a pretty extreme result.

And Alderman Cicely Fleming, 9th Ward, said that if a resident can’t afford to pay off three tickets, they’re unlikely to be able to pay the boot fee on top of that.

But Deputy City Manager Erika Storlie said it’s even worse to have people faced with needing to pay off five tickets plus the boot fee.

Voss said that once a car becomes boot-eligible the city sends the owner a notice and the owner has 30 days to settle the debt before the car can actually be booted.

“We’ve been doing payment plans for years,” he added. “The object is to get people to pay the tickets. If there’s a hardship, come talk to us. It’s not about punishing people, but getting them into compliance.”

The committee discussed, but didn’t recommend any change to another another gap in the city’s tools for getting tickets paid.

Currently people with parking permits are required to pay off their parking tickets before getting a new annual permit. But there’s no similar requirement to pay tickets before renewing a city vehicle registration — the “wheel tax.”

But Voss said that one problem there is that some residents who live in condos park in their building’s garage and end up never paying the wheel tax.

The change in the boot ordinance is scheduled to be introduced at the City Council’s July 24 meeting.