Architects for a museum planned for Oak Avenue in Evanston won approval of their designs from a city staff committee this afternoon.

The City Council approved a special use permit for the proposed Evanston Museum of Time and Glass 18 months ago.

The museum, owned by Cameel Halim, a real estate investor who owns the Carlson Building and other properties in Evanston, would house his extensive collection of antique time pieces and art glass. 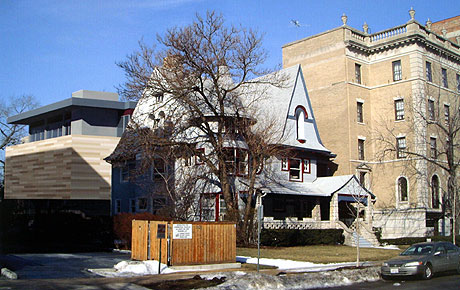 A photo of the existing building with a rendering of the addition superimposed behind it.

The plans for the property at 1560 Oak Ave. would preserve the existing Queen Anne Victorian mansion there, the former home of the Catholic Woman’s Club of Evanston, and add a 6,000 square foot contemporary-style addition behind it.

Architect Donald Kavin said construction of the addition likely will begin next spring with completion about a year later.

The plans include nine parking spaces behind the addition. A condition of the special use permit requires the museum to provide valet parking for heavily attended special events.

The existing building is a protected local landmark and city Preservation Coordinator Carlos Ruiz said the Preservation Commission had reviewed plans for the project twice. 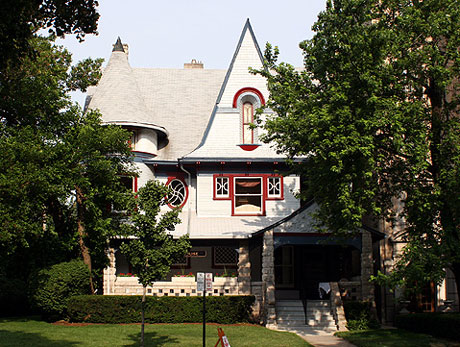 A summertime view of the former Catholic Woman’s Club building.

He said the preservation ordinance says “contemporary designs should not be discouraged” but should try to be compatible with the existing structure.

The commission concluded that “the addition would not be competing with the original landmark house,” Ruiz said, “and could in theory be removed in the future without causing damage to the landmark.”

The addition will be surfaced with a combination of glass, stucco and manufactured hardboard panels.

Jill Chambers, the city’s director of building and zoning, praised the “handsome design” of the project, and Committee Chair Walter Hallen said the museum “will be a welcome addition to Evanston.”