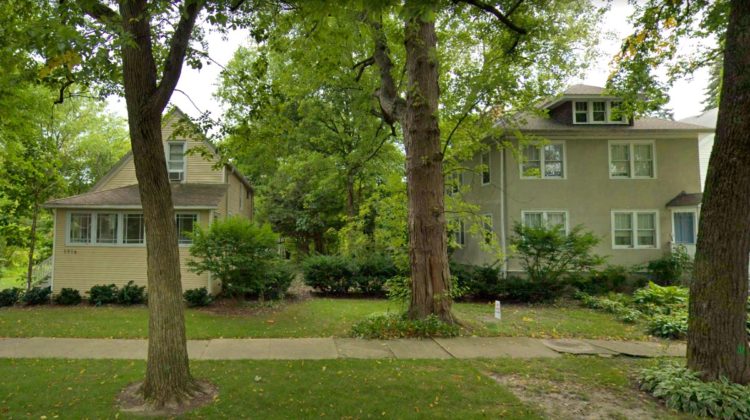 1918 Noyes St., the tiny vacant lot between homes at 1916 and 1920 Noyes, could become the site for one of the city's first micro dwelling units. (Google Maps image)

A proposal to permit micro dwelling units in Evanston won approval from the Zoning Committee of the Plan Commission Wednesday night.

The text amendment, which would apply throughout the city, is being sought by Andrew Gallimore, who last year acquired the 16.5 foot wide, 2,450 square foot lot at 1918 Noyes St. for $20,000, from a seller who had purchased it in a tax sale the previous year.

Gallimore says he wants to build a tiny home on the lot to provide an independent living opportunity for his older brother who has special needs. “A tiny home would be an ideal solution for my family,” Gallimore told the Zoning Committee.

The proposal drew support from affordable housing advocates, including Robinson Markus of the Evanston Development Cooperative and Sue Loellbach of Connections for the Homeless.

The proposed text amendment would define a micro dwelling unit as one having a ground floor area of 500 square feet or less entirely surrounded by open space on the same lot. Only one such unit would be permitted on a lot, unless special use approval was sought.

Under the proposal, such dwelling units would be permitted in any of the city’s residential zoning districts.

They would require a 27-foot front yard setback, a three-foot rear yard setback and a side yard setback of three feet, except for side yards abutting a street, where 10 feet would be required.

The maximum building height would be 28 feet.

The proposal now goes to the full Plan Commission and from there to the City Council for final approval.