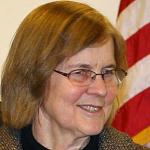 Tisdahl is the organization’s 56th president and the second from Evanston.

The inauguration took place at the NWMC annual banquet at Green Acres Country Club in Northbrook.

Outgoing NWMC President Sandra Frum of Northbrook thanked the membership for rising to the challenge she set last year when she called upon the membership to become more involved in the legislative process and be at the table when laws that affect local government are being considered.

She noted the efforts to prevent passage of the firefighter minimum manning and responsible bidder bills and the work to remove the more onerous provisions of the fire department consolidation and fire department dissolution bills.

In her inaugural remarks, President Tisdahl thanked President Frum for her leadership and dedication over the past year. She encouraged the membership to be a larger presence both in Springfield and at home regarding legislative issues and especially protection of local government revenues.

She encouraged more officials to travel to Springfield and expand upon the core group of NWMC members who carry the messages of the organization.

“We ought to have our bags packed and be ready to head to Springfield when the Conference calls”, she said. Finally, President Tisdahl outlined a number of initiatives for the coming year and said that “these will not happen unless you lend your talents to the NWMC.”

The Northwest Municipal Conference is a membership-supported association of 43 municipalities and one township representing a population of over 1.3 million Illinois residents. Established in 1958, the conference seeks to strengthen local government and enhance intergovernmental cooperation in the north and northwest suburbs of Chicago.