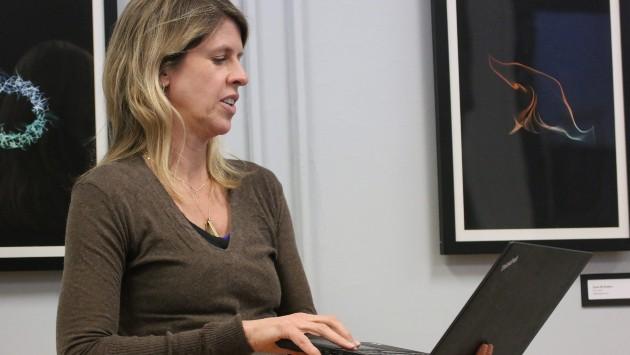 Kiera Kelly speaking at a DAPR meeting in 2019.

Kiera Kelly of 2436 Orrington Ave. said the building should be much shorter — somewhere between four and 12 stories.

However, an illustration presented by the developers shows four other buildings of roughly the same height as the proposed 19-story office tower within about a block of the proposed site at 601 Davis St.

The developers have claimed that with two transit stops nearby, many of the anticipated 950 ofifce workers at the planned building would take public transit or bike to work, reducing the need for parking in the building.

But Kelly said, “This is the suburbs” and most “suburbs are not set up for public transportation” — predicting a very high percentage of workers arriving from outside Evanston would drive.

Lori Keenan of 2214 Colfax St. said the design of the proposed building is unsightly and “twice as high as it’s supposed to be.”

“I don’t know why you have to give away the charm of our community,” Keenan said.

Linda Del Bosque of 1110 Grove St. said, “This is such a big project. I don’t think Evanstson is ready for it.”

Del Bosque claimed there are a lot of vacancies in the nearby 20-story 1603 Orrington office tower, although the building is listed as being 93.1% leased.

Kerry Dickson of Vermilion Development said the overall office vacancy rate in Evanston is now 5% — less than half the vacancy rate in downtown Chicago, which has experienced a recent building boom.

“Evanston is a desirable place to have an office,” Dickson said, “and it’s been 20 years since a new office building was built in downtown Evanston.”

City staff raised a range of technical questions about the plans — from the placement of trees along the sidewalk to the location of the water service — as well as critiquing details of the building’s design.

In addition, Community Development Director Johanna Leonard said that the developer’s offer to lease 78 parking spaces in a city-owned garage for one year, in addition to providing 40 spaces on site, wasn’t sufficient.

The developer needed to agree to a longer-term lease and to lease additional spaces, she said.

Dickson said, “We don’t have any concern about providing whatever the parking need is.”

But he said he wanted to avoid having to pay for too many spaces during the initial lease-up period for the property and then wanted to be able to periodically recalibrate how many spaces were actually needed once the building was fully occupied.

“It’s less to do with the length of the commitment and more to get the right number,” he said.

With the city staff workday running out at 5 p.m., the committee voted to continue discussion of the project at DAPR’s next meeting on Wednesday, Dec. 4.

After it completes DAPR review, the project will be evaluated by the city’s Plan Commission before seeking final approval from the City Council.